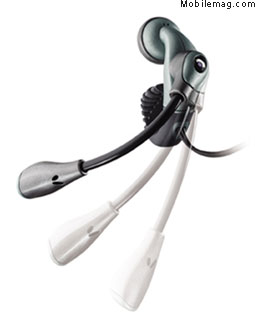 Plantronics, Inc continues to extend the boundaries of style, comfort and sound quality with the introduction of their newest product — the MX150 mobile headset. With Plantronics unique Flex Grip(R) design and superior sound quality, the MX150 is positioned to become the newest “must have” accessory for mobile consumers.

The MX150 leverages the success of Plantronics’ popular MX100 mobile headset, which sold over 1 million units in less than a year. Incorporating the stability and comfort of the Flex Grip(R) design from the MX100, the MX150 adds a discreet, bendable noise-canceling boom microphone for those who need superior sound quality in noisier environments.

“It was a natural step to leverage the MX100 platform for the MX150,” said Matt Miller, director of product marketing. “By using elements of the MX100 design we were able to quickly bring a new offering to the market and deliver the comfort and fit that we know consumers want. We think it’s a dynamite product.”

The MX150 is one of three new headsets joining the Plantronics mobile line. Plantronics will also be introducing two additional headsets for first-time or occasional headset users, the M40 and M60, offering superior quality and reliability at an affordable price. The M40 is a discreet in-the-ear model, and the M60 features an over-the-ear boom microphone. “The addition of the MX150, M40 and M60 extends the Plantronics line of mobile headsets to 10 models, with a broad range of styles, features and price points,” added Miller.