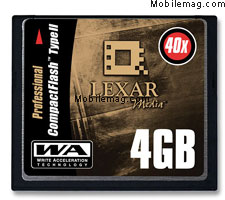 The 4GB memory card is designed to meet the insatiable demand of professional photographers for high-capacity storage. For many professionals, 600 RAW images is on the camera quality, resolution and image file selection mode.

The 4GB memory card is designed to meet the insatiable demand of professional photographers for high-capacity storage. For many professionals, 600 RAW images is comparable to the number of images shot in a day, which allows for extended, uninterrupted shooting and fewer memory cards to manage throughout the day.

The 4GB card is speed rated at 40X, which is capable of a sustained minimum write speed of 6MB/s. As with all of Lexar Media Professional Series CompactFlash, the 4GB card features Write Acceleration (WA) technology, to achieve even greater speeds in WA enabled cameras. Lexar Media Image Rescue software is included free with the 4GB card, enabling photographers to recover deleted or seemingly lost images, or permanently erase the card preventing future image recovery.

“Once again Lexar Media is leading the memory card industry by delivering the highest capacity CompactFlash on the market,” said Jim Gustke, Lexar Media, general manager of marketing. “Many segments of the professional photography market have a real need for extraordinary capacity CompactFlash cards. Commercial, wedding, celebrity, fashion, and sports photographers often shoot hundreds of images uninterrupted and many shoot in RAW or TIFF mode to capture the highest quality image possible. Because professional cameras can generate RAW files over 9MB and TIFF files in excess of 15MB, extremely high capacity CompactFlash cards, such as our 4GB, are now a necessity.”

“By allowing this large number of high quality images to be saved on one CompactFlash card, we expect professional photographers will increasingly shoot the highest quality image possible,” said John Omvik, director of product marketing, Lexar Media. “We also expect professionals with our 4GB card to become more adventurous and shoot without concerns of capacity limitations. This unique combination enhances the photography experience and increases the chances of capturing winning shots.”

“Until the introduction of this card, I was shooting with 1GB cards and often I filled four in a single afternoon,” said Jim Jordan, advertising, fashion and celebrity photographer. “With a 4GB card, I don’t waste time changing cards in the middle of a shoot. With the high profile clients I typically shoot for, regular card changing can be an inconvenience to both of us. At the end of the day, I only have one card to keep track of, which simplifies my life and my assistant’s life.”

“I’m on location almost 250 days of the year and many times in unpredictable climates and on unpredictable terrain,” said Jeffrey Aaronson, internationally recognized photojournalist. “With Lexar’s huge capacity 4GB CompactFlash card, I can keep my card in my camera at all times and not worry about changing the card in dangerous situations or exposing the inside of my camera to the elements, which provides ease of mind and allows me to focus on creating images.”

The 4GB card is available now at many photo specialty stores at an expected price of $1,499.