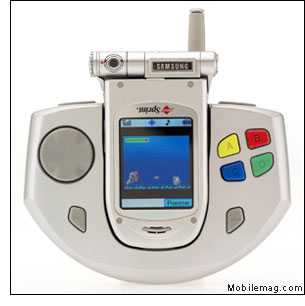 Sprint and Samsung are extending the reach of wireless games to serious gamers nationwide by offering the first attachable game controller. The PCS Game Pad is the perfect accessory for PCS Phone by Samsung A600 users who want a true gaming experience, in addition to the ability to make clear calls and take wireless pictures. The phone simply slides into the PCS Game Pad, giving gamers a more robust gaming experience through its simultaneous key press feature and game-controller form factor. The PCS Game Pad will be available in mid-August at http://www.sprintpcsaccessories.com for $39.99.

“Sprint recognizes that the number one reason customers own PCS Phones is to communicate. But with PCS Vision(SM) from Sprint customers can do more with their phones than just make clear calls, and we have seen evidence of this with PCS Games. Sprint recently announced more than 2 million games have been purchased since the launch of PCS Vision last August. The PCS Game Pad gives those customers the ability to move their console games into the palm of their hand, without sacrificing the qualities they look for in a wireless phone,” said John Garcia, senior vice president of sales, marketing and distribution for the PCS Division of Sprint.

“The wireless gaming industry is experiencing a huge surge in popularity, and Samsung recognizes that consumers desire a device that converges both entertainment and communication,” said Peter Skarzynski, senior vice president of wireless terminals, Samsung. “The PCS Game Pad transforms the A600 into a mobile gaming unit that die-hard gamers will find familiar in design, without compromising the integrity of the phone’s design, mobility, and superb functionality.”

— Embedded charging port: Simply plug your phone’s charger into the PCS Game Pad, and you can recharge the battery while playing your favorite mobile game.

— Automatic pause with incoming call: Never miss an important call – the PCS Game Pad automatically pauses the game to notify the customer of an incoming call. Once the call is complete, the game can resume where it was left off.

— Lock and release button: The A600 is locked in the PCS Game Pad so gamers never lose their connection in the middle of a game.

The PCS Game Pad is available with the newly launched PCS Phone by Samsung A600. The A600’s design allows the upper screen to swivel 180 degrees at the phone’s midsection to face away from the user, making it simple to immediately share VGA-quality pictures taken with the phone’s integrated digital camera. The flip then can be folded so that the 65,000-color TFT main screen serves as an external color display for capturing and sharing images when the phone is closed taking landscape pictures and for instantly identifying callers via picture caller ID. The A600 is available for $349.99 in Sprint Stores nationwide.