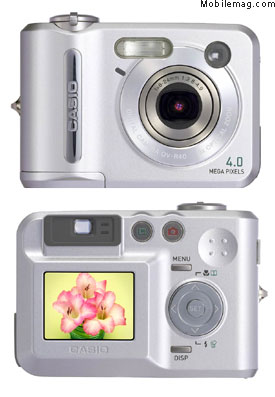 Casio announced a new addition to the QV Digital Camera series, the new compact 4.0 megapixel QV-R40 Digital Camera. The new QV-R40 has 1-second power up time and industry leading* 0.01-second release time lag (both values approximate), ensuring you can capture those special moments whenever they happen.

CASIO recorded the 0.01-second release time lag mark last year with the release of its high-resolution 4.0-megapixel QV-R4 and 3.0-megapixel QV-R3, eliminating one of the most serious shortcomings for digital cameras up to that time. The ability to record images virtually the instant they happen, along with 3X optical zoom soon made these high-performance models the digital cameras of choice the world over.

The new QV-R40 is the next generation model for the QV Series QV-R4, and is loaded with features. The QV-R40 sets the pace for performance and speed, featuring a new high-speed telescoping optical 3X zoom lens and a high-speed startup control, making startup 1 second faster than the QV-R4. Playback is faster, too, with the new QV-R40 scrolling through images on the monitor screen at a rate of about 0.1 second per image. Also a pair of direct mode access buttons for REC and PLAY turn the camera on directly, letting even a novice digital camera user operate the new QV-R40 with confidence. Compact, feature-filled yet easy-to-use, the QV-R40 is set to become the new standard for speed and performance in the compact digital camera market.