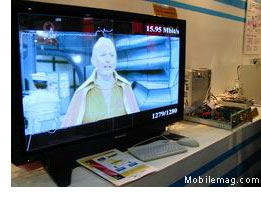 ViXS Systems, the leading developer of video networking chipsets and software, is showcasing the latest generation of home networking technologies by demonstrating uninterrupted streaming video over 802.11 networks at Expo Comm Wireless Japan. The technology demonstrations, in collaboration with some of Japan’s leading manufacturers, offer conference attendees a glimpse into various types of new in-home video capabilities based on ViXS’ XCode and Matrix video-optimized chipsets.

All demonstrations will take place at Expo Comm Wireless Japan in Tokyo from July 16-18, 2003 in Nissho Electronic’s booth, #441. Nissho is a primary distributor of ViXS’ products in Japan.

At Nissho’s booth, ViXS’ XCode video processor is combined with Sony’s RoomLink network media receiver to demonstrate the delivery of multiple video streams using the Universal Plug and Play (UPnP) AV standard. UPnP AV enables the discovery, connection and control of devices within a wired or wireless network, and it allows home media networking devices to dynamically and automatically join a network, convey its capabilities, and learn about the presence and capabilities of other devices on the network. Using this technology, the ViXS video server delivers broadcast-quality video to clients by detecting, controlling and managing the video stream. A UPnP device that is enabled for streaming video then receives and displays a guaranteed 30 frames per second of uninterrupted video.

In a separate demonstration, ViXS adds its XCode video processor to a media delivery server from NEC to deliver simultaneous, high QoS video streams over 802.11b to laptop PCs and a personal digital assistant (PDA). In addition to showing ViXS’ high-quality of wireless streaming, the demonstration uses various video sources ranging from local content stored on a hard drive to networked video content distributed from streaming servers. This capability is critical to satisfying consumers’ variable video networking needs, giving them unified access to geographically dispersed content and allowing them to stream their favorite video content regardless of where it is stored.

“Wireless video capabilities will play a key role in the use of media centers in the home,” said Hideaki Tani, general manager, NEC. “We’re dedicated to bringing advanced wireless technologies to the Japanese market. These demonstrations at the Wireless Japan show are a prime example of the types of technologies that interest consumers.”

“Considering all the major manufacturers represented at the Wireless Japan conference, this is the ideal venue to give both companies and consumers a sneak peek at the changing face of home video, ” said Sally Daub, president and CEO of ViXS Systems. “These technology demonstrations reflect the market demand in Japan for chipsets specifically built for video delivery in the home.”

ViXS is represented in Japan through its local distributors, Nissho Electronics and Macnica Techstar.