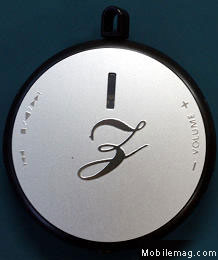 Two local venture firms announced yesterday that they succeeded in developing the world’s smallest and lightest MP3 player, a breakthrough that highlights yet again this nation’s prowess in the newly emerging portable device industry.

The EMP-Z model boasts the smallest size of anmy MP3 player, 42mm in diameter and 10 mm in thickness, resembling, at a glance, a 500 won coin. Its weight of 15 grams is lighter than that of two 500 won coins put together, according to the companies.

Excluding the embedded rechargeable batteries, the MP3 players will weigh less, about half of the weight of the current lightest models in the market, the companies said.
In order to reduce both the size and weight of the device, the two companies have focused on “slimming down” by getting rid of non-core functions such as voice recording. Moreover, they combined the USB port and the earphone jack in an effort to simplify the device.