MiTAC International Corporation’s revolutionary smartphone made a dazzling debut at Grand Hyatt Hotel today. Differing from traditional phones with their near-exclusive focus on voice calls, the Mio 8380 exemplifies MiTAC’s innovative approach to wireless communications products, as the company has developed a device that is truly at the forefront of technology advances.

The Mio 8380 smartphone integrates the Internet, entertainment, audiovisual media playback, digital photography, audio recording, personal information management, and e-mail into a mobile phone with a large high-resolution color screen. With the Mio 8380, the mobile phone has embarked on a totally new era, marking a paradigm shift from being a portable device for transmitting and receiving voice to a platform that ties together all strands of the digital universe. MiTAC is providing consumers with an exciting new user experience, providing them with a personalized mobile high-style life (M-Life) through the Mio 838, while also offering the opportunity to take advantage of the vast potential of mobile commerce (M-Commerce).

The clamshell-style Mio 8380 is a tri-band color mobile phone supporting GPRS as well as GPS 900, 1800, and 1900 MHz, making it compatible with cellular networks virtually anywhere in the world. Its high-resolution 65,000-color 2.2″ TFT-LCD screen is large enough for browsing photographs or watching videos. Moreover, even in bright sunlight, the LCD provides clear, realistic image quality for the best possible viewing experience. The integrated digital camera provides a 110K pixel optical sensor and advanced functionality such as auto-focus and auto-brightness controls. Photographs can be saved as screensavers, and even digital video clips can be shot and stored on the phone itself or on an SD/MMC flash memory card.

“Not only is Hong Kong considered as one of the most important strategic markets for Mio’s product lines, but also serve as the central hub of IT products sales in the great China region.”, said Francis Tsai, Corporate President of MiTAC International Corp. “MiTAC is pleased to see the debut of Mio 8380 in H.K. through BPI.’s distribution network. Partnering with Intel, Microsoft and BPI, we are confident that Mio 8380 will become one of the most successful smartphones ever launched in H.K. The cellphone users in H.K. will be able to enjoy a variety of dazzling features Mio 8380 equipped, and the service BPI provides to unleash the unlimited possibilities of the digital lifestyle in a metropolitan city like Hong Kong. ”

MiTAC’s Mobile Communication Business Unit General Manager Samuel Wang stated, “The Mio 8380 was designed from the ground up to incorporate 3C technologies — consumer electronics, computing, and communications—in order to accommodate emerging trends. By combining these capabilities, the Mio 8380 can not only provide traditional voice calls, but also multimedia, entertainment, and data exchange features. Moreover, with the Mio 8380 MiTAC has integrated Internet access and the ability take advantage of the virtually unlimited resources of a stand-alone PC—as well as content and services made possible by MiTAC’s cross-industry alliances. The result is a product that can offer users the many benefits of what we call M-Life and M-Commerce — delivering incredible value for our customers.”

Margaret Lee, HK & PRC district manager for the Communication Sales Organization of Intel said, “Wireless devices require greater performance and lower power consumption to increase the range of their capabilities and extend battery life. Intel is pleased to work with MiTAC in launching its first smartphone to combine telecommunications, computing, flash memory storage, and other elements in a single device. We hope to pursue together with MiTAC more advanced wireless products to satisfy the expanding market segment demand.” 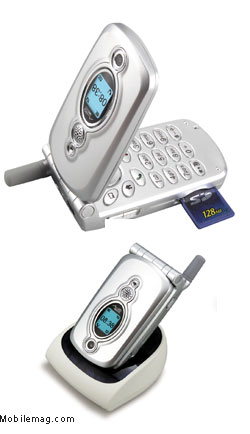 The Mio 8380 smartphone incorporates the Internet Explorer browser and e-mail capabilities for easy access to online information. Moreover, the Mio 8380 supports data interchange and synchronization with a PC through the Mio 8380’s infrared port, USB cradle, or connection cable. The Mio 8380 provides a greater range of added functionality than traditional mobile phones, which typically support only basic personal information management and data synchronization with Outlook. Users of the Mio 8380 can retrieve e-mail anytime and from anywhere, as well as use it to browse the Web and keep up with the latest information. With the Mio 8380, the mobile phone has been transformed into a miniaturized computer, allowing users to perform tasks usually reserved for a PC–such as enjoying video, browsing digital photographs, playing games, and listening to MP3 files. As the development of wireless communications technology and markets moves toward the incorporation of such features as color screens, data transmission, and multimedia playback, the Mio 8380 Windows smartphone and its successors promise to be leaders in the field.