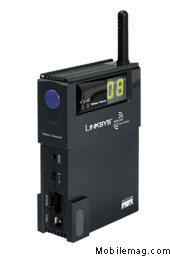 LinkSys announced they will soon release a Wireless-B Game Adapter. This gives any wired-Ethernet-equipped game console wireless connection capabilities. The Game Adapter can be used in two different ways. If you have an existing home wireless network with a cable or DSL Internet connection, the Game Adapter lets your PlayStation®2, Xbox™ or GameCube™ attach to the network so you can get into online games without running wires to the game room. Or, use a pair of Game Adapters to form a “cable-less cable” between two game consoles for head-to-head gaming — in the same room, or all the way across the house.

It’s completely driver-free, so there’s no software-installation hassle, and it works on any platform. And the innovative Channel Selector Button with LED display makes wireless network configuration into child’s play. If you’re using two Game Adapters, just press their Channel Selector Buttons until the channel numbers match, and you’re connected. To connect to an existing wireless network, press the Button to select Infrastructure mode. If your setup’s a little different, there’s an easy-to-use PC-based Setup Wizard to guide you through. Then just plug the Adapter into your game box, and go.