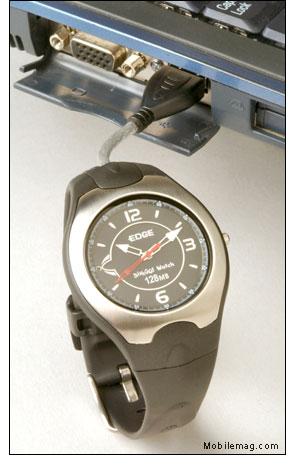 Geek watches. I L-O-V-E geek watches. I have watches that take pictures, record voice memos, make calculations, store phone numbers and tell me which way is North. Although I enjoy each one in its own way, they all have one very obvious thing in common: they LOOK like geek watches. Few tools are more effective at creating a “dinner for one” scenario than a calculator on your wrist. Heck, I’ll torture myself by doing the calculation on my phone’s tiny dialpad before I head to a party with that sucker. So you can imagine how impressed I was when I received the new Memory watch from Edge Memory.

We get plenty of gadget shipments around here so it took me a minute to realize what I was looking at: A 64 MB USB 1.1 drive encased in a wrist watch. Cleverly lodged inside the strap is the USB cable that connects the watch drive to any computer with a USB port. Right out of the box this looks like a really nice watch. Not chunky, thick or button covered.

I am a huge fan of portable USB key storage devices. Requiring no power of their own, I’ve had a small 32 MB USB drive stored in my wallet for years. Unfortunately, it was also one of the first of its kind and required you to install drivers in any PC you wanted to use it in. The new variety are plug and play on any PC running Windows 2000, ME, Windows NT and XP. The Memory Watch is no exception and even comes with software allowing you to secure your data.

Like all self respecting gadget nuts, I left the instructions and software back in the box and just plugged it into my laptop (Win XP Pro). Sure enough, I had a new drive show up seconds later. I was doing the drag and drop two step with utter abandon at 4.2MB per second. Once the transfer completed, I disconnected it, tucked the USB cord back into the strap and headed out for the day. As usual, I brought the device down to all my favorite electronics shops. The staff were pretty juiced at how low key they had managed to keep the storage function. It may say 64MB and USB on the watch but most folks would never notice it.

Below is a photo comparing the size of the Memory Watch with my normal Guess watch and my uber geek Casio Wrist Camera.

Overall I was very impressed with this product. My only gripes are minor. There is no backlight lighting on the display and apparently no fluorescent paint on the needles so it’s virtually impossible to tell the time in the middle of the night. It also has no alarm functions, however I rarely every use that feature on my other watches. Other than that, the unit’s a killer. I plan on handing them out as holiday gifts to both geeks and non-geeks alike. You can pick up a 128MB version for yourself for $89.00, what a steal!