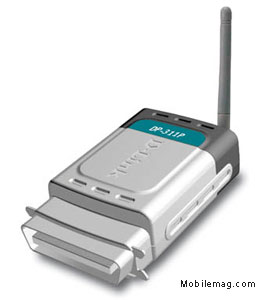 Press Release: D-Link recently introduced its compact D-Link Air DP-311P Wireless Print Server, the latest in its family of quality, affordable wireless networking solutions. A one-port wireless print server that plugs directly into a standard parallel-port printer, the DP-311P gives users the ability to share one printer among multiple PCs and laptops. With the D-Link Wireless Print Server, the printer can be placed in the most convenient location for printing documents from networked computers without running cumbersome printer cables throughout the home or small office.

Plugging directly to a standard parallel port printer with a Centronics connector, the D-Link DP-311P Wireless Print Server provides 802.11b wireless connectivity so that documents can be printed from multiple PCs and laptops on the network. For maximum flexibility of network configuration the unit operates in either infrastructure or ad-hoc mode and multiple DP-311P-enabled printers can be used on the same wireless network.

The D-Link Air DP-311P Print Server will be available through authorized retail, reseller, and distribution partners in mid-July at a Manufacturer’s Suggested Price MSRP of $149.99. The D-Link Air Wireless Network Print Server comes with a One Year Warranty and absolutely FREE 24/7 Technical Support including firmware updates.