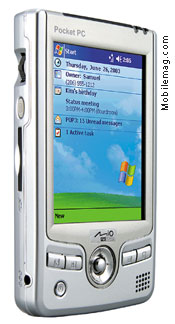 MiTAC International Corporation has announced the release of two new models in its Mio line of Pocket PCs. Based on Intel® PCA processors 400 MHz and Microsoft’s new Windows Mobile™ 2003 Software for Pocket PCs, the Mio 339 and Mio 558 provide a comprehensive range of standard handheld and productivity applications, as well as a host of exciting advanced features. The Mio 339 is targeted at consumers, with overall designs making them ideal devices for enriching users’ digital lifestyles. The Mio 558, on the other hand, is aimed primarily at business users and technology early adopters who wish to take advantage of its powerful connectivity features.

The Mio 339 is elegantly styled devices that are priced to put them within reach of nearly anybody who wishes to take advantage of all that a digital lifestyle has to offer.

One of the most appealing features of the Mio 339 is sure to be its integrated digital camera. The 300K CMOS camera provides sharp, vibrantly colored photographs that can be viewed on the Mio 339’s large 3.5″ LCD screen, or downloaded to a PC for archiving, e-mailing to friends and family, or posting to the Web. For clear shots even under poor lighting conditions, the Mio 339 includes a built-in flash.

The Mio 339 is packed with other features that add fun and enhance personal productivity. In addition to basic PIM applications, such features include MP3 playback. This feature means that the Mio 339 can double as a portable MP3 player, letting users listen to their favorite tunes wherever they go. The two Mio models come with a wired remote for convenient playback control while users are on the go. Another appealing feature is audio recording. Users can record lecture notes, leave themselves voice memos, or preserve other audio information. As the MP3 format is supported for recording as well as playback, sound files recorded with the Mio 339 can easily be shared with others.

The Mio 339 is even more than superb audio-enabled handheld computers. With the built-in infrared transceivers, it can also serves as remote controls for controlling home entertainment devices such as televisions and DVD players. As if the standard capabilities were not enough, the Mio 339 also provides an SD slot for easy functional expansion. This slot supports the huge range of SD flash memory card-based peripheral devices as well as additional storage for photos, personal information, and other data.

The Mio 339 is stylishly crafted, measuring only 13mm in thickness and weighing around 120 grams. In addition, it features an elegantly designed joystick control for simple, intuitive navigation around the screen and instant access to commonly used functions.

The Mio 558—The Pocket PC for the connected corporate user

The Mio 558 is aimed at corporate users, with a wealth of features designed to ensure that it integrates well with corporate IT infrastructure, and includes the latest connectivity technologies.

The Mio 558 offers full support for the IEEE 802.11b standard. Whenever in range of a wireless LAN base station—whether in the office, at home, or in public spaces where there is coverage—users can connect wirelessly to the Internet, accessing their e-mail or browsing the Web. Corporate users away from the office no longer need worry about missing important information and can stay connected virtually anywhere they go. The antenna is embedded in the casing of the Mio 558, eliminating the danger of damage due to a protruding antenna. 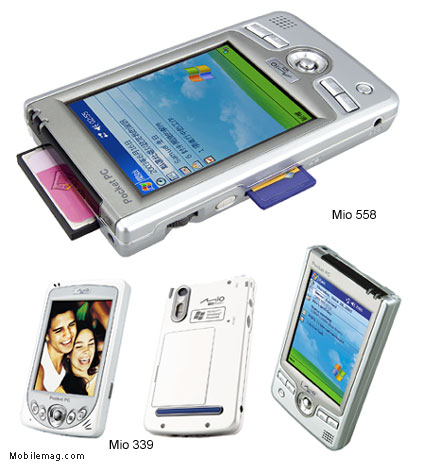 Moreover, the Mio 558 provides support for VoIP (Voice Over Internet Protocol), allowing users to take advantage of low-priced Internet calls. This feature will be especially appreciated by business travelers, as it not only saves their companies on the expense of overseas long-distance calls using the public phone networks, but also provides a consistent interface for making such calls from anywhere in the world.

Moreover, the Mio 558 comes with an extremely broad range of expansion options including both a CompactFlash and SecureDigital slot. With support for these popular expansion interfaces, users can not only use flash memory cards to extend the storage capacity of their Mio 558, but can also access the huge array of peripheral devices and digital content modules that use the CompactFlash and SecureDigital interface standards. Business users will also appreciate the handy voice recording capability of the Mio 558—perfect for meeting notes, voice memos, and other audio information. The Mio 558 also includes MP3 playback.

The Mio 558 is designed for superior ergonomics and easy handling, with a slim form factor that fits perfectly in the hand, and a joystick control for convenient operation.

The Mio 339 and Mio 558 are the latest addition to MiTAC’s popular line of Pocket PCs and other portable information appliances. Samuel Wang, General Manager of New Business Unit of Mitac International Corp. stated: “We’re very excited about the launch of these three new Mio models. They not only maintain the high standard for design that has been set by previous models, but they also add a number of very exciting innovations. We’re confident that they are only going to add to buzz surrounding Mio.”

“Windows Mobile 2003 Software for Pocket PCs offers users the best in wireless connectivity and messaging, and all the features people have come to expect from technology-leading PDAs,“ said Juha Christensen, corporate vice president of the Mobile Devices Division at Microsoft Corp. “With its new Windows Mobile-based Mio Pocket PCs, MiTAC is providing digital media capabilities for consumers and addressing the wireless connectivity needs of corporate users.“

“Intel(r) PCA processors have been enabling many popular handhelds with unprecedented performance, low power management and small form factor – features that are fundamental for success among consumers, ” said Mark Johnston, Director of Communication Sales Organization, Intel Asia Pacific . “We congratulate MiTAC’s introduction of their next generation handhelds, based on Intel PCA processors, aiming to provide superb consumer experience for basic to sophisticated users.”