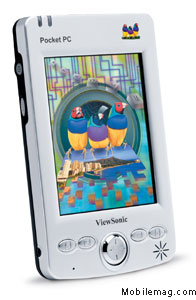 The V36 uses Intel’s XScale™ 300 MHz processor for quick performance and includes 32MB of ROM and 64MB of SDRAM (36.45 user accessible) to power its 3.5 inch full-color 320×240 resolution transflective screen. At approximately one-half an inch thick and a lightweight 4.8 ounces, the product extends ViewSonic’s award-winning form factor. Also included with the product is a synchronization cable to support easy updates to users’ PCs.

At an estimated street price of $329, in addition to providing an unlimited PDA experience, the V36 also offers multimedia capabilities with an integrated 300K digital camera that allows users to take photos at resolutions up to 640×480. A removable lithium-ion battery allows for extended usage time through the option of “hot swapping” the power supply without turning off the unit.

Wireless functionality is available through the purchase of ViewSonic’s new 802.11b Secure Digital Input/Output (SDIO) card. Just larger than the size of an average thumbnail, the card weighs a mere .15 ounces and will add wireless functionality to the ViewSonic Pocket PC V36 and will sell for an MSRP of $129.

“Windows Mobile 2003 software for Pocket PCs provides a great experience for wireless connectivity, messaging and all the features people have come to expect from a company like ViewSonic,” said Juha Christensen, corporate vice president of the Mobile Devices Division at Microsoft Corp. “The V36 adds value to the Windows Mobile 2003 software by bringing users digital photo and extended use capabilities.”

ViewSonic Pocket PCs will be available beginning in August through authorized ViewSonic resellers and retailers and are backed by a one-year limited warranty on parts and labor. An optional two-year extended warranty is also available. ViewSonic offers toll free technical support, 24 hours a day, 7 days a week.

Size and Weight – With an ultra-thin design weighing about four ounces, it truly is a Pocket PC.

Display – Indoors or out, colors are vivid and text is crisp with the 3.5″ full-color transflective display. High 320×240 resolution keeps your image details clear.

Infrared Port – Support for beaming contacts, schedules, or any file including images, music files or documents.

Multimedia Functionality – Watch MPEG videos and listen to MP3 files with the Pocket PC V36. Even play music in the background while working within other applications.