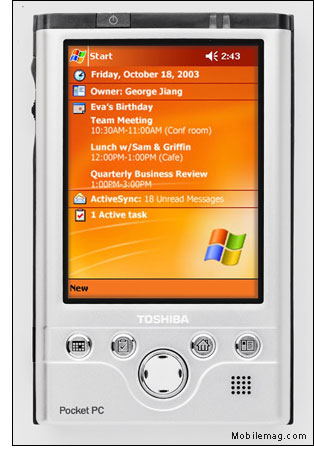 “Windows Mobile 2003 software for Pocket PCs is an exciting new platform designed to keep PDA users connected and allow them to enjoy new media applications, whether they’re at the office or on the road,” said Juha Christensen, corporate vice president of the Mobile Devices Division at Microsoft Corp. “Toshiba has embraced the benefits of Windows Mobile 2003 software with its new handheld devices, allowing its customers to maximize the full potential of the PDA as a mobile productivity tool.”

Maximizing storage management and expansion functionality, the Pocket PC e750/e755 Series offers 96MB of memory, 32MB of which is dedicated NAND flash memory. Files, critical applications or programs stored in the NAND flash memory will remain intact even if the battery of the device runs down or needs to be reset. Integrated CompactFlash® II and Secure Digital™ (SD) expansion slots are also included for additional storage and data transfer capabilities.

Priced at only $299, the Pocket PC e350/e355 Series is one of the thinnest PDAs in the industry and weighs a mere 5.2 ounces so mobility is never compromised. Adding style with productivity, the new PDA is packaged in an attractive premium graphite casing, designed for the active lifestyle.