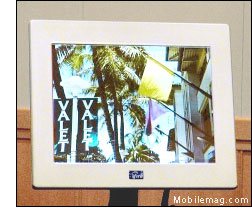 iFire Technology Inc, a Canadian next-generation display panel technology development company, held a press conference in Tokyo recently to show its 17-inch inorganic electroluminescent (EL) display. Though it’s still at a prototype stage, many Japanese companies have an interest in it.

“In the past, my business trip to Japan took one week. But this time I stayed in Japan for two weeks because we received requests for meetings from many Japanese companies,” said Anthony B. Johnston, president of iFire. Masazumi Ishii, executive vice president, Corporate Development of the company revealed that they showed the prototype display to the Ministry of Economy, Trade and Industry (METI) just before the press conference.