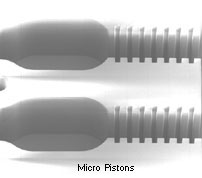 University of Birmingham engineers have developed tiny engines only a few millimetres wide that will soon replace a standard battery.

These micro-engines have over 300 times more energy than an ordinary battery and are much lighter and smaller. These new power-supplying machines will soon be used to charge mobile phones and lap top computers in a matter of seconds thereby eliminating the need to recharge them frequently.

Dr Kyle Jiang, lead investigator from the department of Mechanical Engineering, says, ‘These micro-engines will be much more energy efficient than standard batteries. It takes 2000 times more energy to manufacture a battery than the battery dispenses while it is being used. Soon everyone will be able to charge their mobile phones instantly using a shot of cigarette lighter fuel instead of having to find a socket for a charger and wait while the phone charges up’.

Micro-engines will also be used during military operations for driving micro air vehicles and micro-robots for reconnaissance purposes; communications relays; micro-cameras and other sensor carriers. Other applications will include micro-factories – tiny ‘labs-on-a-chip’ that will be able to make drugs, chemicals or small mechanical components.

Investigators at the School of Engineering are the first to manufacture these engines in a durable, heat resistant material such as ceramic or silicon carbide.