ATELAB Research Group unveils the first details about Chameleon – a new mobile phone for players. The device operates in two positions; vertical as a mobile phone and horizontal as a game console.

Chameleon has a traditional numerical keypad with control buttons. Such configuration maintains all the mobile phone features. The key arrangement makes it possible to operate Chameleon in vertical position with one hand only.

What is new is an extra pad over display used as a game controller in a horizontal mode (console style gaming). A change in mode from phone to gaming device is very simple and requires turning the device 90 degrees counterclockwise.

Game menu is selected in two ways. The first one involves choosing the right option from the mobile phone menu, while the other one is realized by turning the phone 90 degrees CCW and simultaneous pressing of the game pad and another button for three seconds. Going back to the mobile phone mode is exactly the same.

Chameleon has been filed for patent protection by ATELAB Research Group. The group has already launched a search for a company interested in cooperation and commercial release of Chameleon style phone. 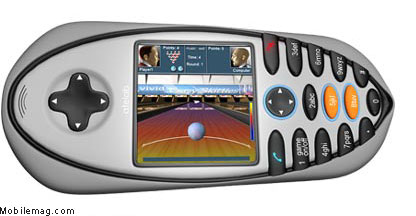