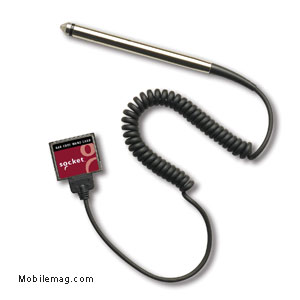 Socket’s SDIO WLAN uses the Intersil PRISM® 3 chipset and Digital Sequence Spread Spectrum (DSS) Wireless LAN technology that enables bandwidths of up to 11 Mbps at ranges up to 400 feet. Socket’s card lets a Pocket PC user roam seamlessly among multiple 802.11b wireless network access points. It also allows the user to download data from wirelessly equipped laptops without a cradle or network connection as well as share data directly with other wireless PDAs.

Pricing and Availability
Socket’s SDIO Scanner is scheduled for availability in mid-August 2003 through Socket’s website (www.socketcom.com) and through Socket’s worldwide distribution channels for an MSRP of $269. The Smartphone version will be released in the fall.