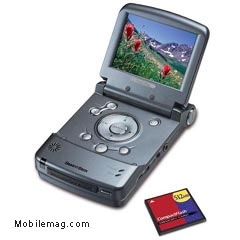 FlashTrax can safely store high-resolution images transferred from any flash memory card onto the built-in 30GB USB2.0 hard drive and displays them on a 3.5″ LCD that outperforms tiny on-camera screens. By using the sleek control pad, the user can change the image, zoom in, zoom out and scroll, or choose a slide show function – all without the need of a PC. The LCD folds to ensure that both the screen and control buttons remain protected while in field use. Images may be viewed on the LCD screen or on any TV using the included remote control. To facilitate portability, FlashTrax also includes a rechargeable Lithium-ion battery.

A built-in MP3 player makes this device even more attractive – more than 7,000 compressed audio files can be stored and played back through the built-in speaker, headphones or external speakers. Various play modes are easily controlled from the user-friendly screen display and control pad, making music selection quick and easy.

With transfer speeds of up to 480MBps, FlashTrax can also serve as an external hard drive to transfer, store and access data or act as a simple backup device.

Watch videos with audio soundtrack – compatible with the video formats created by the “movie” mode of many digital still cameras. View pictures or videos on a TV monitor with included video cable and infrared remote control.

Pricing and Availability
Suggested retail price for FlashTrax is $499.99.