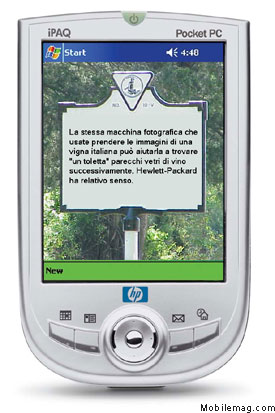 ExtremeTech reports: “The same camera you use to take pictures of an Italian vineyard may help you find a “toletta” several glasses of wine later, if Hewlett-Packard has its way.

Researchers in Hewlett-Packard’s labs have developed their own method of pairing a digital camera and computing device to translate signs and text in a foreign language back into English. The technology, a software applet running on an Hewlett-Packard iPaq PDA, will hopefully form the foundation for an eventual product, researchers said.

Translation services have become more sophisticated over the past few years, as Web-based databases like Babelfish have provided basic consumer level translation of languages based on Roman characters.

Now, with 802.11, Bluetooth, and other wireless technologies, researchers have begun to take this particular computing capability out into the real world. IBM has developed a similar text-translation device, as well as a means to approximate real-time voice translation, another useful tool for business travelers.

“OCR is a well-known science,” said Daniel Tretter, the project manager at HP’s Imaging Technology Department in Palo Alto. “What isn’t easy is how to determine what is text and what is just part of the image.””