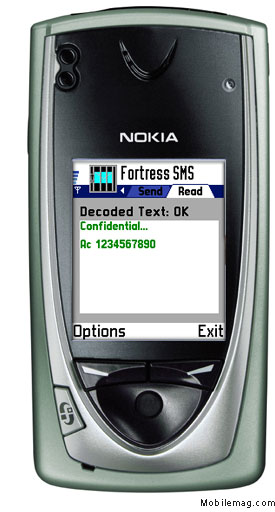 InfoSync World reports: “Privy to sending SMSes you’d rather not want anyone else listening in on? If so, Silicon Village’s Fortress SMS and its AES encryption might be something for you.

Once every now and then, everyone sends an SMS message with content they would rather not have anyone read except for the recipient. Despite the built-in encryption of mobile operator networks, however, there is in fact the odd chance that someone with the required skills could listen in on both your conversations and SMS messages – and there is no way it can be avoided without special equipment or software. Silicon Village’s new Fortress SMS belongs in the latter category.

Launched as what the company claims is the world’s first service independent end-to-end solution for sending secure SMS messages, Fortress SMS is a new new encryption application which aims to provide secure end-to-end data transmission for SMS messages on the Series 60 and Symbian OS platforms. ”