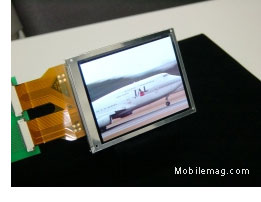 Hitachi Ltd announced it has developed an organic electro luminescent display panel with the more than double the peak brightness of current devices.

The organic EL display panel is the same as the prototype displayed by Hitachi Displays Ltd at “EDEX 2003” held in April 2003. However, the company announced for the first time that the brightness can be changed.

A spokesperson at the firm’s laboratory said, “Traditionally, the brightness of white when displaying text on the white screen and that of stars in the nighttime sky displayed on the screen have been the same. The new organic EL display panel can automatically change the brightness of the stars.”

To enhance the peak brightness, Hitachi adopted an electric pressure-driven display panel to take advantage of changing power voltage that is supplied to the each organic EL device of the color display panel, depending on the type of screen.