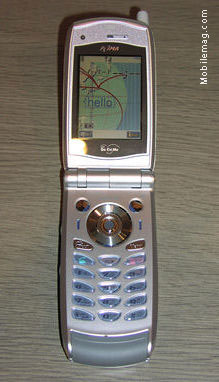 NTT DoCoMo, Inc. and its eight regional subsidiaries announced today the FOMA N2701, the first dual-network handset that works both with DoCoMo’s mova 2G and FOMA 3G networks. The N2701 goes on sale nationwide on June 11, 2003.

The phone can be set to operate exclusively in 2G or 3G mode, or set to switch automatically between the two networks according to available signal strength. Currently, the FOMA network area extends to approximately 91% of Japan, while the mova 2G network covers approx. 100 % of the nation. As the dual handset realizes a vast service area, FOMA users can be assured of nationwide access, including such vicinities as mountainous regions.

The FOMA N2701 is a multitasking handset, meaning that the user can perform multiple tasks simultaneously, such as talk on the phone while downloading a file or browsing the web.

With DoCoMo’s i-motion™ mail service, the FOMA N2701 can e-mail standard video clips of up to approximately 15 seconds (100 KB). Clips can be created with either of the unit’s two built-in cameras, or downloaded from i-mode sites. The phone shoots video at up to 15 frames/second.

The FOMA N2701 will be available through all DoCoMo sales channels. The price of the handset itself will be open (unfixed), and its standard accessory kit, including battery pack, AC adapter and desktop holder, will cost 4,400 yen. This price applies to the area covered by NTT DoCoMo, Inc. and may vary according to region.