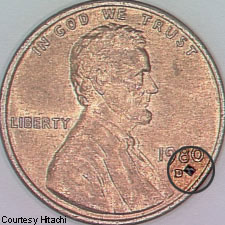 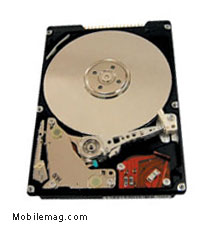 These developments give new-found mobility to users who were previously “plugged-in” to their desktops for the performance advantage. But users of the new Travelstar 7K60 mobile drive will not have to give up battery life for the additional speed. The new 7200 RPM drive offers power-consumption parity with its 5400 RPM counterpart, due to Hitachi’s newly miniaturized femto slider.

The femto slider — or the tiny flying wing supporting the read/write head above the surface of the disk — reduces power consumption and increases shock performance, adding to the overall superior mobile experience of the Travelstar 7K60. At 60 gigabytes (GB) of storage, the 7K60 is also the industry’s most capacious 7200 RPM mobile hard drive.

IBM is the first to support Hitachi’s 7200 RPM mobile drives and will be shipping them in new, more powerful ThinkPad systems later this summer.

Within the same family, Hitachi also announced today the Travelstar 5K80, which earns its rank among the Travelstar elite with the industry’s highest performance and highest capacity at 5400 RPM. The 5K80 offers capacities ranging from 20 to 80 GB. IBM plans to incorporate the Travelstar 5K80 in several ThinkPad notebook models next month.

Hitachi underscores its mobile technology leadership with the industry’s first implementation of the femto slider, which represents a 30-percent reduction in size over the previous-generation slider, called “pico.” The new femto slider is less than 1 mm by 1 mm in dimension, which is roughly the size of the ball on a standard ballpoint pen.

“The tremendous revolution in hard disk drive storage technology over the past half century was led by miniaturization of every component in the system,” said John Best, chief technologist, Hitachi Global Storage Technologies. “That trend continues with the introduction of the femto slider, which will enable significant improvements in manufacturing productivity, disk storage capacity and mechanical performance.”

In addition, more efficient manufacturing can be achieved with the femto slider: when fully utilized, there can be up to a 65-percent increase in the number of femto sliders produced per wafer as compared to pico.

Hitachi Travelstar drives have consistently led the industry in performance, but power users needing 7200 RPM performance have had to give up mobility to obtain desktop-level data speeds.

At 7200 RPM, the 7K60 spins 33 percent faster than its 5400 RPM counterpart, resulting in the following improvements:

The 7K60 also shows a 20-percent improvement in average seek time (time it takes the read/write arm to arrive at the desired data track).

The industry-leading 7200 RPM Travelstar defines a new mobile HDD category aimed at satisfying the needs of the most demanding mobile users. The Travelstar’s new performance speed also helps to support an industry trend toward using notebooks as a desktop replacement.

The Travelstar 5K80 offers the only 80 GB 5400 RPM mobile drive in the industry, boasting 30 percent more storage capacity than its closest competitor. In benchmark testing, the 5K80 performs, on average, 10 percent faster than competing 5400 RPM mobile drives currently on the market. The 5K80 has the lowest acoustics in a mobile drive and comes in 20, 40, 60 and 80 GB capacities. The 5K80 represents a combination of sophisticated hard disk drive design and technology leadership to support the notebook industry trend toward standardization on 5400 RPM performance.

Both the 5K80 and 7K60 are shipping in volume this month. Hitachi’s new mobile drives complement the 4200 RPM Travelstar 80GN, shipped late last year, to offer customers the broadest portfolio of 2.5-inch mobile hard disk drive products on the market.

Additional information on the new Travelstar hard drives and femto slider technology can be found at http://www.hgst.com/travelstar.