Just in time for the five-year anniversary of Bluetooth, Sony Ericsson. is launching a new Bluetooth handsfree, the HBH-35. It has longer talk and stand-by time, better sound quality and increased functionality with phones from other brands. The HBH-35 will be in shops starting in June.

It was on May 21, 1998, that Ericsson, IBM, Intel, Nokia and Toshiba launched the Bluetooth wireless technology. The industry quickly picked up on the new to-be standard and today there are over 2000 member companies in the Bluetooth Special Interest Group. A great future was predicted for the technology, it was said that it would replace all cables and wires, and now it has reached wide market acceptance.

While the technology has developed during its childhood period, a large number of attractive products and solutions have been launched. As an example, Sony Ericsson who has been pioneering the Bluetooth market, has sold around 1 million Bluetooth handsfree sets.

The new HBH-35 is Sony Ericsson’s seventh Bluetooth handsfree. It replaces the HBH-30 and features several improvements, including longer talk and standby times, better sound quality. Giving up to five hours of talk time and up to five days (125 hours) standby, the HBH-35 will be one of the strongest on the market, lasting any long hectic working day filled with phone calls. The HBH-35 supports the Bluetooth Headset & Handsfree profile, consequently the hands free can be used with any mobile phone that has built-in Bluetooth™ and supports this profile.

The HBH-35 is comfortable to wear and easy to use and it also supports all the advanced voice features of Sony Ericsson’s Bluetooth phones. Voice control can be used to call contacts or to answer and reject calls as well as change the profile or activate the sound recorder in the phone. 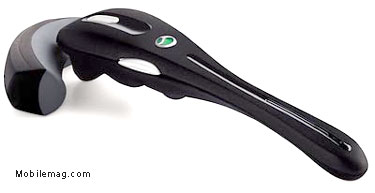 Sony Ericsson currently has Bluetooth handsfree solutions meeting different user needs. Together they cover what consumers ask for in wireless headsets and handsfrees. For high performance, HBH-30 and the new HBH-35 offer excellent talk and standby times and superior sound quality. These are used mainly in the office and in the car, and are also perfect for noisy environments.

For stylish communications, the neat and lightweight HBH-60 is convenient to always have at hand. Suited perfectly for when on the move and needing to free hands for other tasks. For added features, HBH-20 and HBM-30 are ideal for heavy phone and smartphone users, the HBM-30 also offering music player feature.

– T68i, the first MMS-capable phone on the market, with colour screen

– T608, the first CDMA phone on the market with Bluetooth. Colour screen and great gaming offering.