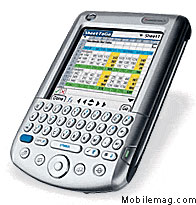 Electric Pocket Limited today announced the global launch of Pixer MMS for Palm OS(r), a standard’s compliant multi-media messaging service (MMS) solution for Palm Powered(tm) handhelds. Pixer MMS is already shipping in the Asia/Pacific region with Palm Tungsten W handhelds and is the first and only MMS solution for the Palm OS platform. Pixer MMS for Palm OS enables Tungsten W handheld users who subscribe to multi-media messaging services to send and receive MMS messages. In addition, users of other Palm OS 3.5+ handhelds and smartphones can send picture messages and handwritten notes directly from their device via MMS. Pixer MMS is specifically designed to make picture messaging easier for users, as they can take advantage of the handheld’s screen and stylus when composing messages. This solution is designed to be particularly attractive for Asia/Pacific markets in which the predominant languages include graphic characters.

Users can either import photographs into Pixer MMS or choose from an extensive catalog of message templates featuring commonly used business stationery and fun cartoon characters. Pictures and photographs can be annotated directly from the device and sent to an email address or MMS enabled wireless device. Support for new multimedia, including sound and video, will become added features to Pixer MMS as host platforms and networks support them.

The ability to send photographs, sketches and picture greetings to and from wireless devices via e-mail and MMS is widely viewed as a key revenue generator for providers of next generation telephony services. Electric Pocket has worked closely with several leading GSM and CDMA cellular operators and infrastructure providers to develop the Pixer MMS solution into one that is compliant with MMS on all networks. Vodafone, Orange, T-Mobile, and SingTel are among the fast growing list of network operators that have successfully tested the application. Pixer MMS also supports the open NowMMS (www.nowmms.com) service, the first such service to enable users of GSM-equipped mobile phones to send MMS messages to subscribers to different wireless network operators.

“Picture messaging will become incredibly popular over the next few years as MMS is deployed around the world,” said Iain Barclay, Electric Pocket’s Chief Product Officer. “We are excited that Pixer MMS brings picture messaging to the Palm OS platform, and enables device manufacturers and operators to offer it to their customers.”