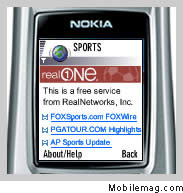 The RealOne Mobile Media Guide is available on Nokia’s 3650 and Pocket PC devices. Devices from Siemens and Samsung supporting the RealOne Mobile Media Guide are expected to be offered in the US later this year. Consumers with a Nokia 3650, available from AT&T Wireless, Cingular, and T-Mobile, can access the guide by simply adding a bookmark for the guides to their phones. Consumers who want to add the bookmark to their 3650 phone can do so at http://mobile.real.com.

“RealNetworks is blazing a trail much as we did with the early days of Internet audio and video,” said Dan Sheeran, vice president, marketing, RealNetworks, Inc. “With enabled phones and devices shipping today, consumers can start really appreciating the world of audio and video content from wherever they are and content providers have the chance to establish their mobile brands now with consumers.”

“In today’s climate, our listeners want an easy way to keep updated on world events,” said Maria Thomas, vice president, National Public Radio. “By offering NPR hourly updates via the RealOne Mobile Media Guide we are able to reach our listeners wherever they are – we believe updates such as this hold great promise for the future of media services.”

“Delivering our music content through as many new platforms as possible is a huge priority for us. Mobile devices are increasingly becoming a key way for us to connect fans with our artists whenever and wherever they are,” said Ted Cohen, Senior Vice President, Development of EMI’s Digital Distribution and Development Group. “Younger consumers and trend setting adults already use mobile phones as an essential tool to not just to work and live, but also to be social, to be entertained and to be informed. Through the RealOne Mobile Media Guide, EMI’s Capitol and Virgin Records can now deliver music videos from emerging and established artists directly through to their mobile devices.”

“CNET Networks’ audience comprises an enormous number of early adopters, including folks who spend a lot of time away from their desktop,” said Brian Cooley, associate vice president of CNET Networks and host of CNET Radio Direct. “We are pleased to extend our CNET Radio Direct digital audio service to users of the RealOne Mobile Media Guide, ensuring they have ‘on the go’ access to the day’s top technology business news.”

With more than 335 million unique registered users of the RealPlayer® or RealOne Player, RealNetworks has been connecting consumers with content on PCs and Macs at home for years, offering users customized and compelling experiences. Now content providers may easily leverage their new and existing RealAudio® and RealVideo® content for mobile devices since the RealOne Player is being distributed to Nokia phones, as well as on Palm’s Zire 71. With the rapid adoption of these devices, content providers have another opportunity to reach an expanding audience in innovative and meaningful ways.