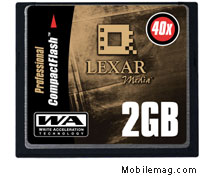 Lexar Media, Inc., has announced the shipment of 2GB 40X-speed Professional Series CompactFlash cards. The superior 40X-speed cards are guaranteed to be capable of a minimum sustained write speed of 6MB/s, and may operate up to a maximum write speed of 7MB/s or more. The 2GB Type I cards are expected to have a retail price of $699.99.

The large capacity cards were developed primarily for professional photographers who often prefer to shoot large image files, such as TIFF and RAW, and have a need for high-speed, high capacity memory cards.

“Professional cameras today produce image files ranging from 5MB to 14MB or more. A 2GB card will allow for extended shooting without having to constantly change cards,” said Denis Reggie, wedding photojournalism pioneer. “When shooting a wedding, I often shoot in RAW mode and fill 8GB of memory. With 2GB CompactFlash, I can extend my shooting time and be more available to catch the spontaneous moments that make all the difference to my clients. Plus, since it’s from Lexar, I am confident that the cards will perform flawlessly – wedding after wedding.”

In addition to carrying a 40X speed rating, the Professional Series cards include Write Acceleration (WA) technology for additional speed performance in certain cameras. Working in conjunction with WA enabled cameras, Write Acceleration increases throughput to take better advantage of the true speed capability of the card. Image write speed is important to photographers because if the camera is busy writing to the card, shots can be missed. To date, Kodak, Nikon and Sanyo support the Write Acceleration standard.

“Image Rescue software is an insurance policy for digital photographers. It’s something you hope you’ll never have to use, but if you do, you’re grateful it’s there,” said John Omvik, director of product marketing. “It’s just one of the many reasons professionals turn to Lexar Media for fast reliable digital media.”

Lexar Media is the only company to speed-rate CompactFlash based on the minimum sustained write speed. The company uses the 1X equals 150KB/s standard, which was adopted from the CD-ROM industry and pioneered by Lexar Media for solid-state memory cards. Lexar Media tests each memory card prior to shipment to ensure that it meets or exceeds the speed stated on the packaging.