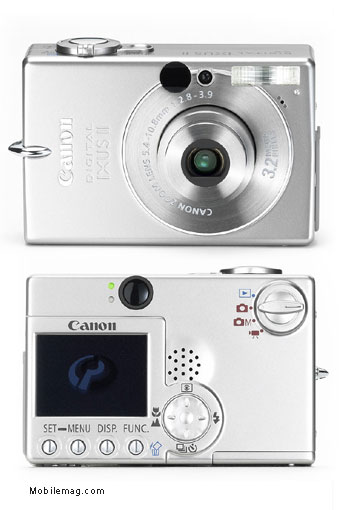 Canon, a leader in photographic and imaging technology, releases today its smallest ever digital camera, the Digital IXUS II. With a clean new platinum white finish and cutting edge design, this super-stylish and feature-rich next generation Digital IXUS is an instant Canon classic.

“With stunning design and unsurpassed build-quality, this visionary camera goes right to the core of Digital IXUS philosophy”, explains Hiroshi Komatsuzaki, Head of Canon Consumer Imaging Europe. “The next generation Digital IXUS II is all about super stylish, super compact photography that just feels great in the hands”.

To make this its smallest digital camera ever, Canon has miniaturised nearly every element of the camera. These include the ‘one dime lens’, first time use of the tiny SD memory card, smallest flash ever to appear in a Canon digital camera, reduced battery size and the unique DIGIC processor. Despite its tiny size, the Digital IXUS II’s 3.2 megapixels will ensure its popularity amongst users looking to achieve high quality prints up to A4 size.

World’s smallest retractable 2x zoom
The Digital IXUS II heralds the introduction of the world’s smallest retractable 2 x optical zoom lens. Nicknamed by Canon engineers the ‘one dime lens’ for its ability to hide under an American dime coin, the f2.8 – f3.9 lens measures a mere 17.9mm in length (when retracted). As pixel counts go up and lens sizes come down, lens quality becomes the crucial element to image quality. Canon’s expertise in advanced lens material and glass molding technologies allows aspherical lenses to be incorporated in the zoom, delivering a sharpness of image not possible from conventional lenses. A 3.2x digital zoom is combined with the 2x lens to achieve a powerful maximum 6.4x combined zoom.

More punch, more petite
Not only has Canon hit the mark on style and size, the new Digital IXUS II comes crammed with features. Video clips of up to 3 minutes can be recorded, replayed with full sound and cropped to the right length with full in-camera editing and previewing. Still pictures can be annotated with 60-second voice memos. Quick and accurate focusing is assured by detecting the subject from a wide area of the frame using 9-point Artificial Intelligence Auto Focusing (AiAF), while accurate automatic exposure is secured through 3 choices of metering mode; evaluative, centre-weighted or spot. A newly designed, 24% smaller Li Ion battery delivers more pictures per charge than a Digital IXUS v³, yet makes the Digital IXUS II smaller and lighter.

Perfect balance, lightning speed
A camera can only benefit from having more pixels if its processor is capable of properly interpreting vast amounts of data in a fraction of a second. This is where Canon’s DIGIC (DIGital Imaging Core) processor comes into play. Optimally designed for Canon’s digital cameras, DIGIC now equips the Digital IXUS II and is purpose built to deliver accurate images of the highest possible quality. The complex algorithms necessary to properly calculate functions such as white balance and color rendition are executed by DIGIC with such high speed there is no trade-off in camera responsiveness. By keeping all key functions onto a single chip, size and power consumption are also reduced. The overall result is more shots at a higher rate with stunning quality.

Photographer’s assistant
Even before the shutter release is fully pressed, the Digital IXUS II is analysing the scene to help get the perfect shot. Canon’s unique iSAPS (intelligent scene analysis based on photographic space) technology works like the photographer’s assistant, pulling together available information such as focal length, luminescence and camera settings. This data is matched against what the camera already ‘knows’ about typical images and settings in order to estimate focusing position, AWB and exposure. The camera is then pre set, so by the time the scene is fully metered only fine adjustments are necessary. This gives the Digital IXUS II faster, more precise auto-focusing and the best possible exposure and white balance in every shooting situation.

Right here, right now printing
Instant lab quality photo printing – on the move and without a computer – is available with Canon’s battery powered Card Photo Printer CP-300, the perfect accessory to the Digital IXUS II. Special postcard-ruled media makes it possible to have a personal postcard ready to send within two minutes of taking a photo. Simply connect, select and print.

Web connect – CANON iMAGE GATEWAY
With CANON iMAGE GATEWAY, every Digital IXUS II customer is provided with 100MB of album space on the web for storing and sharing favorite photos. With downloads from the CANON iMAGE GATEWAY site, users can also change the start-up image and sound effects, such as shutter release – just as downloads can be used to personalise mobile phone rings.

Shoot anywhere – under water, in snow, on sand
For diving, surfing and skiing a newly designed waterproof case has been released, effective for use to a depth of 40 metres. A flash diffusion plate reduces reflection off silt, resulting in cleaner images – particularly with close-ups. A new double-layer lens glass prevents fogging and large, easy-to-use buttons allow all functions to be accessed easily – even with gloves.