Creative, a worldwide leader in digital entertainment products for PC users, today announced the new NOMAD® Jukebox Zen portable audio player with 60GB – twice the storage capacity of the new Apple® iPod™ 30GB model yet priced at $100 less. With the amazing capacity to store 16,000 songs, the NOMAD Jukebox Zen with 60GB fits easily in a pocket and can carry a huge library of music anywhere with generous disk space remaining for data storage. The NOMAD Jukebox Zen with 60GB will be available in May for only US$399.99.

The huge storage capacity of the NOMAD Jukebox Zen with 60GB enables users to store large uncompressed audio recordings in WAV format without loss of audio quality. Then they can transfer the files to virtually any desktop or notebook PC using the NOMAD Jukebox Zen’s ultra-fast USB 2.0 connectivity.

The new NOMAD Jukebox Zen with 60GB boasts industry-leading audio quality at 98dB SNR, plus 14 hours of battery life, compared to the Apple iPod’s eight hours. Additional differentiating features of the NOMAD Jukebox Zen include the intuitive Scroller, for fast, easy movement through an entire music collection of MP3, WMA or WAV files. Creative’s unique “Find” function allows users to locate any of thousands of songs quickly and easily using alphabetical input—just press the Scroller on the first letter of a favorite artist, song or genre to quickly jump through the alphabetical listings to a desired selection in just seconds. The NOMAD Jukebox Zen’s AudioSync feature even enables consumers to move and synchronize their music between multiple desktop and notebook PCs. The bundled Creative File Manager program enables the NOMAD Jukebox Zen to be easily used as a high-speed external portable hard drive. 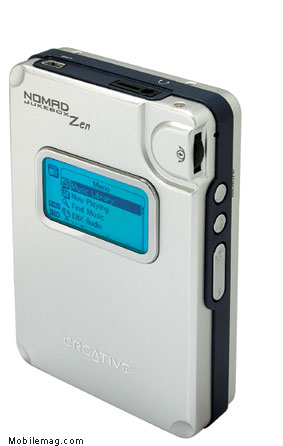 The NOMAD Jukebox Zen with 60GB features a cool-looking anodized aluminum case. The player comes bundled with a stylish carrying case with belt loop, which is great for rugged usage on the road. Creative’s popular and comfortable stereo backphones are also included. For use on the go, a built-in, rechargeable lithium-ion battery powers the NOMAD Jukebox Zen, giving users up to 14 hours of mobile music playback. An optional FM Wired Remote is also available for the NOMAD Jukebox Zen, which features an FM tuner, built-in microphone, playback controls and a cool, blue backlit LCD.

The NOMAD Jukebox Zen incorporates Creative’s proprietary and powerful EAX® audio technologies to offer a wide range of music customization and enhancement tools. For noisy listening environments such as a plane or car, Smart Volume Management™ (SVM) intelligently controls the dynamic range of a song for a superior listening experience, so that the quieter portions of a track are not missed. For late night listening, SVM lowers the very loud portions of a song so that sudden volume increases are not disturbing. In addition, users can enable the SVM “Match Volume” feature to keep the playback volume of all the tracks on a playlist at the same level regardless of the volume level in which they were encoded; users do not have to reach for the volume control between songs. EAX technology also boasts Advanced EQ, Time-Scaling, Environmental Effects, and 3D Spatialization features.