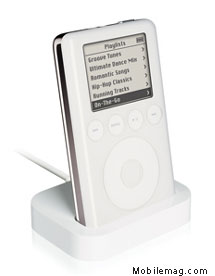 Apple today introduced its third generation iPods, which hold up to 7,500 songs in a stunning enclosure that is lighter and thinner than two CDs. The new ultra-portable iPods feature completely solid-state “no moving parts” navigation wheel and buttons; an elegant new dock with audio out for fast and easy connection to your computer or stereo; an “On-The-Go” playlist so users can build a playlist right on their iPod™; a customizable main menu so users can promote the features they use most often to their top level menu; and Apple’s unique, patent pending Auto-Sync for automatically syncing your computer’s music library with iPod. The new ultra-portable iPods are available in three models: a 10GB model for just $299 (US), a 15GB model for $399 (US) and a 30GB model for $499 (US).

“The competition hasn’t even caught up with our first generation iPod, and we’re introducing our third generation,” said Steve Jobs, Apple’s CEO. “With the new iTunes Music Store, you can now buy music online and transfer it right onto your iPod for listening wherever you want.”

The new 15GB and 30GB models come with an elegant dock for effortless connecting to a Mac® or Windows PC. The dock provides a stylish home base for the iPod and includes an audio line out for easy connection to a home stereo or powered speakers, making it easy to sync, charge and go. iPod plays more than eight hours of continuous music and recharges automatically whenever iPod is in the dock or connected to a Mac or Windows PC.

iPod is the only portable music player with Apple’s patent pending Auto-Sync, an innovative feature that automatically downloads an entire digital music library into iPod and keeps it up-to-date whenever the iPod is plugged into a Mac or Windows PC. With Apple’s new fast disk mode switching, iPod switches from Auto-Sync mode to music-player mode faster than ever before. 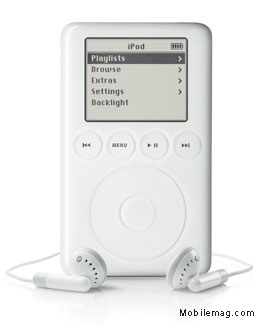 Building on the success of the original touch wheel, the new iPod is designed with a solid-state “no moving parts” navigation wheel and all touch buttons for enhanced sensitivity and precision over mechanical buttons. The buttons are backlit for easy operation in low light and continue to enable easy, one-handed operation. In addition to MP3, iPod now supports the industry-standard AAC audio format, providing higher quality sound in the same disk space. Whether at the gym, at work, in the car or at the airport, iPod puts 7,500 songs in your pocket—the equivalent of three weeks of continuous music without repeating a single song.

iPod features new customization options including the ability to move frequently used menu items to the main menu. Users also have the power to create an “On-The-Go” playlist and rate their music collection directly on their iPod, offering a new level of control whenever they’re away from their computer.

Pricing & Availability
The new iPod for Mac and Windows PCs will be available on May 2, for a suggested retail price of $299 (US) for the 10GB iPod, $399 (US) for the 15GB iPod, and $499 (US) for the 30GB iPod through the Apple Store® (www.apple.com), Apple’s retail stores and Apple Authorized Resellers. Laser engraving is available for $19 (US) and can include two lines of text with up to 27 characters per line. The new iPod will also support high-speed syncing via USB 2.0 with Windows PCs starting in June via a free software download. A separate USB 2.0 cable will be available in June for $19 (US).

All iPod models include earbud headphones, an Apple iPod power adapter, a FireWire® cable and a 4-pin-to-6-pin iPod FireWire adapter. 15GB and 30GB iPod models also include the iPod Dock, carrying case and wired remote; these optional accessories can be ordered for 10GB iPod models through the Apple Store. iPod requires a Mac with FireWire port, Mac® OS X version 10.1.5 or later (Mac OS X v10.2 or later recommended) or a Windows PC with FireWire or USB 2.0 port, or Windows-certified FireWire or USB 2.0 card, Windows Me, Windows 2000, or Windows XP Home or Professional. A CD containing iTunes®* for Mac OS X and MUSICMATCH Jukebox Plus 7.5 software is included with iPod purchases.