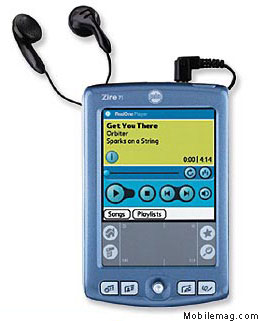 Designed for youthful professionals, the Zire 71 handheld helps users integrate their digital lifestyle with Palm’s world-class business and personal productivity capabilities. Market research studies from Russell Research reveal that 29 percent of U.S. consumers likely to purchase a PDA in the next several months want a built-in camera, demonstrating a strong interest in the ability to capture snapshots on impulse. The Zire 71 handheld does this and more, while still fitting in the user’s pocket and budget. The Palm(TM) Universal Connector enables customers to add peripherals such as the Palm Ultra-Thin Keyboard. The Palm Expansion Slot lets people use personal productivity, entertainment, education and backup cards.

“Multimedia became the focal point of our new Zire handheld because a gap exists between the people who want this functionality and the cost they have had to pay to get it,” said Ken Wirt, senior vice president of sales and marketing for Palm Solutions Group. “For only $299 and the price of an expansion card, customers can enjoy their favorite music, share photographs, play a short video of friends having fun — of a child’s first steps and words — and grab a snapshot on the run.”

New Design Includes Integrated Digital Camera
The Palm Zire 71 handheld’s innovative new design features a slider that reveals and activates the digital camera, providing the opportunity for fun, impromptu digital images. A bright 320 x 320 display that supports more than 65,000 colors acts as the viewfinder, and snapshots can be saved within the 16MB of memory (13MB usable) or onto expansion cards that range to 256MB and beyond. The camera automatically activates by sliding open the device. With the touch of a button, users can instantly capture the photo.

Other new Zire handheld features include a fast, ARM processor that boosts power and speed for video clips or games, and 5-way navigation with an all-new joystick-like button for one-handed operation. 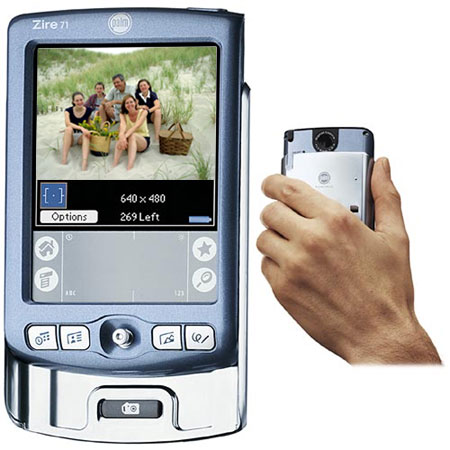 Managing Digital Photos
One of the four application buttons on the front of the Zire 71 handheld accesses Palm’s photo application for organizing and managing digital images on the handheld. Users can assemble photo albums, beam images to friends, and move pictures to and from an expansion card.

The Palm Photos application also has been integrated into the Palm Desktop Windows edition, providing photo viewing, organizing and basic editing functions. Performing a HotSync(R) operation will move photos to and from the Zire 71 handheld, so images can be transferred to the desktop for cropping or rotation, and then synced back for a portable photo album. Macintosh users can easily drag and drop photos onto the “Send to Handheld” icon.

Listening to Music and Watching Video
For listening to music files and playing movie trailers, the Zire 71 handheld ships with RealNetworks’ RealOne Mobile Player and Kinoma Player and Producer.

MP3 or RealAudio files stored on an expansion card(2) can be heard through the handheld’s new built-in speaker, or via the stereo headphone jack located at the top of the device. This jack accepts standard headphone plugs(2) and provides excellent stereo sound quality. With RealNetworks’ RealOne Mobile Player software, users can create and manage play lists, as well as run music in the background while using most other built-in Palm applications.

With Kinoma Player and Producer, and a free downloadable QuickTime application, Zire 71 handheld users can display their own home movie clips on the device, as well as download movie trailers and other pre-formatted material from the Internet.

Personalized Zire 71 Handhelds
Customization of Palm handhelds has always been possible with accessories and downloadable applications. The Zire 71 handheld takes customization to a new level by providing more than 30 color-theme options through Palm OS(R) 5.2.1. The new themes and colors range from Rose to Desert to Chocolate, changing the visual appearance of information displayed on the screen.

Palm also introduced a range of accessories for the Zire 71 handheld, including the following:

— MP3 Audio Kit — an excellent accessory kit for listening to music and audio books on the Zire 71 handheld (includes a 64MB expansion card, an SD Card/MultiMediaCard reader/writer and stereo headphones), scheduled to be available in May for $99.95 (estimated U.S. street price);

— Power To Go — a battery-recharging sled scheduled to be available in May for $99.95 (estimated U.S. street price);

The complete range of accessories for the Palm Zire 71 handheld, including expansion cards, cases and covers, can be found at store.palm.com or www.palm.com/zire71.

Availability
Consumer-electronics outlets, major retail chains and online e-stores will sell the Palm Zire 71 handheld, which is available now in most countries worldwide.