NTT DoCoMo, Inc. announced today that the company will unveil its latest sigmarion series handheld PC, the sigmarion III, making it easier than ever before for mobile users to read and write messages, use popular applications and browse the internet via connection to a wireless terminal. DoCoMo expects to begin marketing the sigmarion III at the end of May or later.

The sigmarion series was launched in September 2000 as a highly mobile mini-PC with high-end functionality and enhanced performance. As the latest addition to the series, the sigmarion III works with Personal Handyphone System (PHS), 2G (PDC), 3G Foma and mobile packet data communications (DoPa) wireless systems. It is also the ideal device to use with @FreeD™, DoCoMo’s PHS flat-rate internet access service that enables users to enjoy always-on internet access.

The new product also incorporates the Picsel Browser™ that allows users to scroll and resize web pages and documents with a stylus, making it easy to view charts and other graphics created with bundled applications such as Microsoft Word, Excel and Powerpoint. A handy quick-start icon that appears on both sides of the display enables applications to be opened rapidly. 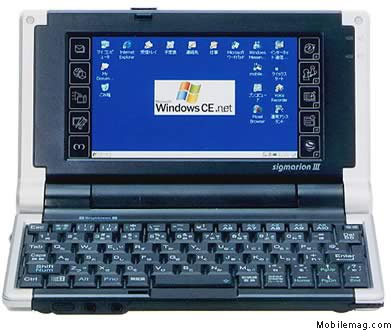 The keyboard has a 14.1 mm pitch for easy typing.

The sigmarion III also comes with Microsoft Internet Explorer 5.5 for CE, providing a web experience similar to that of a notebook PC. Microsoft Windows Media™ Player lets sigmarion III users enjoy music and watch videos. Another bundled application, mobileCustom™ Ver. 2, enables the desktop screen, icons and similar items to be customized with a wide variety of content and software.