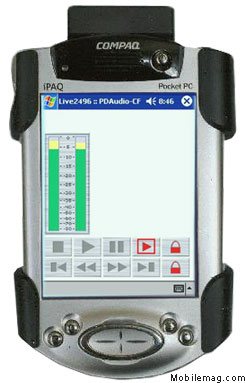 PDAudio-CF from Core Sound is a Recording System For PDAs, Laptop and Desktop systems. Rather than being a single piece of hardware, PDAudio is a system of inexpensive hardware and software components you can select among to assemble a very compact recorder that meets your needs.

The centerpiece of the system is PDAudio-CF, a Type I (extended) Compact Flash S/PDIF interface with optical and coaxial inputs. PDAudio-CF can be mounted in PDA hosts that run Windows CE/Pocket PC 2002 or Linux (such as HP/Compaq’s iPAQ), or used with laptop and desktop computers running Linux, Windows 2000 or Windows XP.

The PDA-based PDAudio will operate on rechargeable batteries for more than enough time to record a concert, and be able to quickly transfer audio data to a computer (PC or Mac) via removable solid-state memory cards (currently available in sizes up to 4 GB from Lexar), removable PC Card (currently up to 5 GB from Toshiba) and CF Card (currently 1 GB and up to 4 GB from Hitachi/IBM come Fall ’03) hard disk drives, high capacity 2.5″ hard drives (40 GB or more) using the PC Card interface, and via wired and wireless local area networks.

The PDA, PDAudio-CF interface, CF storage cards all fit together in one compact package, using a dual CF (or PC Card) expansion pack.