Motorola, Inc.’s Automotive Division has unveiled two brand-new versions of a customized V60i mobile phone. Based upon one of the most popular mobile phone models in North America, the phones are available in black with leather or chrome on chrome and are engraved with the Harley-Davidson 100th Anniversary logo. The mobile phones will be sold initially at participating Harley-Davidson dealerships across the country.

“Harley-Davidson recognizes that mobile phones were one of the leading lifestyle products purchased by consumers during 2002,” said Ruth Crowley, vice president of Harley-Davidson. “Harley-Davidson understands the need for family and friends to stay in touch while away from home, especially during our 100th Anniversary events. We thought this high-tech phone from Motorola was a nice addition to our line for 2003.”

“Motorola is excited to create a product that incorporates Harley-Davidson’s brand and enables us to help celebrate their 100th Anniversary in a unique and relevant way,” said Tim Callard, vice president and director of sales for Motorola Automotive. “We believe that consumers will find the authentically-styled V60i anniversary mobile phone a must-have, and a natural extension of their Harley-Davidson mobile lifestyle.”

Motorola is working with a wireless-activation and specialized-distribution company, American Wireless, Inc., to facilitate this 100th Anniversary mobile phone offering. With its wireless carrier contracts, distribution facilities, and call center, American Wireless will process phone orders for the Harley-Davidson dealers and assist consumers in either selecting a new service plan from a variety of major, national wireless carriers or migrate their existing wireless phone number and service plan to a carrier-compatible phone. Cost of the mobile phone is dependent upon the differing service plan options.

The 100th Anniversary customized V60i mobile phone offers an array of exciting features. In addition to phone calls, this pocket-sized mobile phone enables Harley-Davidson enthusiasts to choose from specially selected embedded ring tones based on popular road songs. The mobile phone is equipped with a variety of standard features including the ability to compose or download other pre-composed ring tones; chat in real-time; play pre-loaded games; download a new game with Java™ 2 Platform, Micro Edition (J2ME) technology or access the Internet to get information on news, weather, stock market and more. Consumers also have the option of purchasing additional Motorola compatible accessories for the mobile phone including an attachable MP3 player, FM Radio, Clip-On Speaker Phone and more. 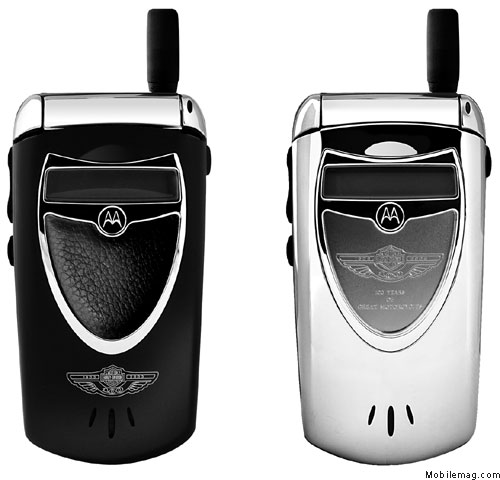