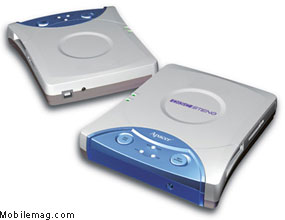 Apacer Technology has announced a new device to satisfy the growing thirst of people on the move for storage flexibility. The DISC STENO CP100 is a portable media copier providing a 6-in-1 card reader and a CD-RW drive that can be used to copy files from the removable media used in digital cameras, digital video cameras and MP3 players on to a CD without the need for a computer. Whether users want to back up important image files on to a CD to free up their more expensive storage media, or they want to share images and audio files with their friends at the end of a trip, they can use the DISC STENO CP100 in the middle of a field or at the back of a bus.

Over the last few years, the popularity and subsequent demand for digital cameras and portable digital audio solutions has skyrocketed. However, until now, when it comes to copying, storing and sharing the latest sounds and most memorable experiences, everyone has had to go back to their desktop PC or notebook. “Apacer’s DISC STENO digital media copier is an easy-to-carry, stand-alone device that allows you to share data and make backups at any time and in any place, it’s an essential partner in today’s digital world,” said Apacer vice president Lawrence Lo.

A key requirement for the Disc Steno, established from close observation of current user habits, was a simple, direct interface that allows users to work instinctively with files without the need to understand complex directory structures or spend time locating particular files. Being stand-alone, users do not even need to know how to use a PC to copy files from their flash memory cards on to a CD. Having inserted their flash memory card and a blank, recordable CD or a rewritable CD with some available space, the user just needs to press the “REC” button and copying begins. An indicator LED reports on progress and shows clearly when the copying is complete. For people on vacation, this ease of use means that users can instantly transfer their digital photos of the romantic streets of Paris, mysterious pyramids of Egypt or modern sights of Sydney to a CD to give to their traveling companions or save for themselves, while freeing up space on their flash memory cards for more photos.

The Disc Steno CP100’s “multi-session” function allows users to record files on to a CD until the entire disc is full. A “REC with check” function provides added piece of mind for people without a PC on hand, by verifying that copying has been completed and file integrity retained. The Disc Steno CP100 supports all major memory card standards, including CompactFlash (CF) Types I/II, Secure Digital (SD), MultiMedia Card (MMC), Memory Stick (MS) and SmartMedia (SM). Apart from stand-alone operation, the DISC STENO offers a high-speed USB 2.0 interface for connection to desktop and notebook computers.