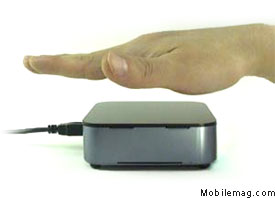 Fujitsu Limited today announced that it has developed a technology for the world’s first contactless biometric authentication system that can verify a person’s identity by recognizing the pattern of blood veins in the palm.

Like fingerprints, the pattern of blood veins in the palm is unique to every individual, and apart from size, this pattern will not vary over the course of a person’s lifetime. The fact that this pattern lies under the skin makes it that much harder for others to read, so palm-vein pattern biometrics are an especially secure method of verification. In contrast to the contact-based biometric technology announced by Fujitsu last August, this new contactless technology alleviates concerns about hygiene associated with having many people touching the same sensor device, making it ideal for widespread use.

Details of this technology are being presented at the general meeting of the Japan Medical Association to be held at the Fukuoka International Center on April 3-6.

The ability to verify identity has become increasingly important in many areas of modern life, such as electronic government, medical administration systems, access control systems for secure areas, passenger ticketing, and home office and home study environments. Technologies for personal identification include code numbers, passwords, and smart cards, but these all carry the risk of loss, theft, forgery, or unauthorized use. It is expected that biometric authentication technology, which authenticates physiological data, will be deployed to supplement – or as an alternative to – these other systems.

For that reason, there is a market need for voice or facial recognition systems and other biometric authentication technology that can read physiological data without requiring physical contact with sensor equipment, and the development of such systems that are both practical and offer greater precision.