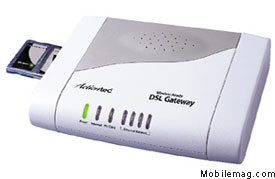 As an avid fan of wireless networking, I’ve been a wi-fi nut for some time. There is just nothing like sitting on my back deck surfing the net while watching DVD’s. So I was pleased when the folks at Actiontec sent their latest offering.

As soon as I opened the box for my new Wireless-Enabled router, I felt just a tad less intelligent. Of all products I have set my hands on, this had to be the most user-friendly install I have ever experienced. If only VCRs were this easy to setup. Installation CDs were sealed to protect me from tossing the wrong one in at the wrong time. Huge fonts were used on labels to instruct skippy as to which ones were to be opened first, second, etc. Colour-coded wires came, with large labels, plugged into colour-coded ports, with large labels. Being the type that rips open a package, plugs it all in, then troubleshoots it, I almost felt a bit let down that it worked, instantly and flawlessly. The large decal on the power cord that said ‘POWER CORD – Plug this end into a power outlet” was a little much.

All that aside, the install was a breeze and the package doesn’t lie. You get a basic router, with a PCMCIA slot for a wireless card that makes it WI-FI enabled. As tested, the unit came with two wireless cards. One for the router and one to put in your laptop. Speed seemed great, and with a little tinkering, I was even able to get it to work flawlessly with both my Sony Vaio 900mhz laptop running on XP PRO and my Toshiba 166mhz laptop running Win98.

As for downsides, It only has one Ethernet port for a wired computer on your LAN. The useful solution, however is the USB connectivity. At this time, I am surfing the web, using the router running to my desktop with the USB, and saved the Ethernet port for the laptop, running a basic Ethernet card.

Two connections only, but two that work, out of the box. If you need to expand you could simply add a HUB and have more connections. The “ActionTec 1-2-3” disk instantly set up the router for Win98, and I was off and running.

Range wise the card performed as expected and compared very well with my current Linksys card. The router however, given the lack of external antennas, was slightly diminished. Not enough to be a serious concern if located centrally in the average home.

Pound for pound, this router is good. If I had a suggestion to make it would be this: An external antenna or at least an antenna port, for longer WI-FI access. A few more wired ports would also be handy. All considered, the ease of set up and consistent quality make this a great unit and I recommend it most everyone, particularly people just starting out on the wi-fi journey.