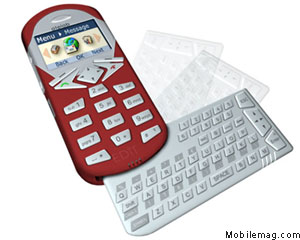 When EDiT is not in use, i.e. with its keypad concealed, a phone equipped with this interface looks like a traditional cellular phone. The primary numerical keypad enables making and receiving calls, and provides full support of menu, voice mail, SMS, EMS just like any other ordinary cellular phone.

The innovation is an additional alphanumerical keypad that slides out from the phone and enables easy editing of SMS & EMS text messages and mobile Email. The user holds the phone in one hand and enters text with his other hand on the additional alphanumerical keypad. In case of an incoming call, the additional keypad can be retracted with one move and the conversation can begin, just like in a traditional cellular phone.

The EDiT interface also facilitates the use of WAP service and the phone’s build-in calendar and organizer features. Everyone who uses these build-in features knows how much time entering new appointments and tasks take.

Depending on the phone’s version, the additional alphanumerical keypad can be extracted in the same way as a blade from a pocketknife, or connected as an accessory on an arm under the phone.

Engineers from Atelab Research assume that the EDiT interface will be made available for use in all types of GSM & 3G phones, from popular phones to handheld business phones that are equipped with complex notepad, Email and phonebook features. Presently intensive tests of the interface’s prototype are in progress.