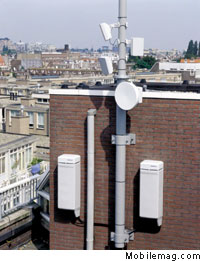 “Nokia executives have revealed plans to deliver high-end cellular handsets that seamlessly switch between 802.11b and public carrier networks in an effort to transform handsets into terminals capable of consuming composite applications.

The switching technology, expected to be deployed in handsets for beta trials toward the end of the year, is designed to extend the reach of enterprise applications and to create new collaboration environments. Although the company has not yet unveiled names for the forthcoming devices, Nokia in April will announce a set of rich applications for vertical markets, including real estate and transportation, executives said.

“We’re chasing the next wave of productivity and [will] support that with new devices,” said Jake Sagehorn, director of business applications at Nokia in Irving, Texas . Nokia’s mobile applications push is backed by a raft of enterprise companies, including IBM, Oracle, Siebel, Sun, and Texas Instruments. Nokia showed off working demonstrations of IBM’s WebSphere, Oracle’s Collaboration Suite, and Siebel’s CRM at last week’s Cellular Telecommunications and Internet Association (CTIA) Wireless show in New Orleans . SAP and PeopleSoft are working to port applications to the handsets as well, Sagehorn said.

Executives explained that the devices will also enable hosted CRM applications — for example, Salesforce.com — to run wirelessly via handset-based browsers such as Opera or WAP (Wireless Application Protocol) 2.0.

Nokia last week also detailed its Nokia One software, which is targeted at carriers and is built on the OMA (Open Mobile Alliance) middleware architecture. Nokia One will enable carriers to offer services such as converting e-mail to voice.”