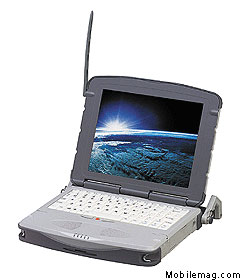 As Desert Storm boosted the sales of Hummers and GPS handhelds, Gulf War II will spawn its own crossover hits, pieces of military equipment that become civilian fetish objects. A prediction: One of the war’s big winners will be Itronix’s GoBook MAX, a sort of Windows laptop on steroids. The GoBook MAX has already been spotted in video from the front, and Air Force firemen deployed in Turkey have them. If Gulf War II is the first Internet war, then a computer should be its first piece of military chic.

No wider than an entry-level ThinkPad but much thicker and heftier, the $4,500 GoBook MAX is a waterproof, vaporproof, shockproof piece of field equipment. “We drop each one 54 times from one meter, bake it in an oven, chill it in a freezer, vibrate it, and submit it to a shower of hurricane proportions,” crows the GoBook’s brochure. Unlike most laptop makers, Itronix specializes in handheld gadgets for hardhats, not wussy desktop PCs. The GoBook MAX is designed for civilian emergency-response teams as well as soldiers in the field. In my hands-on tests, it easily survived a few tosses across the floor of a local Starbucks-plus a spill of my third double espresso onto its keyboard. Its rubber-gripped handle makes it feel like sports gear rather than fragile electronics.

Itronix says the MAX is big among FBI bomb squads and NYPD anti-terrorist units. For government buyers, the MAX comes bundled with a restricted software package called CoBRA (or Chemical Biological Response Aide), a search engine that can identify some 60,000 chemical agents, plus a few dozen biological threats. Select the symptoms of victims at a disaster scene, and CoBRA will tell you how long you have before your hazmat suit craps out.

For civilians, the MAX offers features to rival new Centrino-powered laptops. Its 700 MHz CPU isn’t the fastest, but built-in Cisco Wi-Fi and a heavy-duty antenna are available as factory options. Dual USB jacks and a PCMCIA slot, protected by sturdy latches, are standard. CoBRA sales reps claim eight hours of work time from one charge to its heavy-duty (and just plain heavy) battery. Chem-bio response teams can’t take off lunch to recharge.

But the company’s roughneck and military clientele belies its much larger potential market: professional parents. Finally, a laptop worthy of the term “toddler-proof.” No disastrous crashes to the kitchen floor. No months of data lost to an incident with the sippy cup. Hazardous materials? Toss it in the dishwasher. Need to get out of the house? The handle flips back to mount the MAX open across the wheel of an SUV for mobile use. There’s even an add-on DVD drive for movies.

With the amount of money office workers spend on their cars alone, a couple thousand dollars more for a droppable, dishwasher-safe laptop is a no-brainer bargain in total cost of ownership. The GoBook MAX gives new meaning to the phrase “homeland security.”