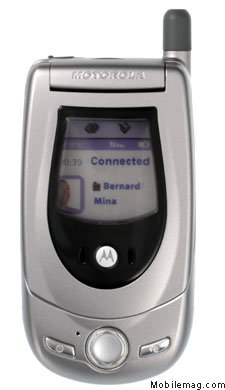 MontaVista Software, Inc., the company powering the embedded revolution, today announced that MontaVista™ Linux® is the chosen operating system for the recently announced Motorola A760 mobile phone, the world’s first handset based on Linux and Java technology.

The Motorola A760 combines features of a mobile phone with the capabilities of a personal digital assistant (PDA), digital camera, video player, MP3 player, speakerphone, advanced messaging, instant Internet access and Bluetooth™ wireless technology. The A760 is Motorola’s first handset demonstrating the company’s commitment to making the Linux operating system a key pillar of its handset software strategy. Motorola will be displaying this phone in its booth (# 4245) at the CTIA Wireless Conference this week in New Orleans.

“This handset is special because it features one of the most open and flexible software platforms,” said Terence Lam, Senior Global Marketing Manager Smartphone and Networked Entertainment Products, Motorola Personal Communications Sector. “By supporting the open source Linux OS along with Java technology, Motorola is providing the most creative and fertile environment possible to set the stage for a “best experiences win” environment.”

“As mobile phones rapidly evolve, the supporting software needs to be more robust to support their rich functionality and networking capabilities. MontaVista Linux provides a powerful systems software platform that can help to quickly bring these advanced products to market ,” said Jim Ready, CEO and President, MontaVista Software. “By standardizing on Linux for its handset software strategy, Motorola is blazing a trail into this new world of advanced consumer electronics, and we are proud to support this trend.”

MontaVista Linux supports a range of enhanced interactive features in advanced consumer electronics products such as the Motorola A760, by providing high performance, real-time capability and consumer-grade reliability. By offering a standard development platform for embedded designs, MontaVista allows developers to focus on their value-add to their customers while enabling them to speed cutting-edge products to market in a cost-effective manner.

According to an IDC report (document 28470), the Embedded Operating System Environment market will reach $1.4 billion by 2006, a combined annual growth rate (CAGR) of 18.6% percent. Further, IDC report number 27653, Worldwide Mobile and Embedded Operating Environment Market Forecast and Analysis, 2002-2006, also listed MontaVista Software as one of the fastest growing vendors in this area.