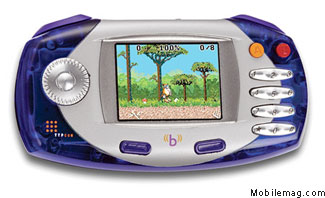 “TTPCom develops the complete technology for mobile devices – a systems perspective that allows us to offer fully integrated solutions from application to antenna,” said Malcolm Burwell, General Manager of TTPCom North America. “As such, here at CTIA Wireless 2003, we will showcase a wide array of new technologies suitable for silicon vendors, manufacturers of mobile phones and data devices, network operators and new entrants to the industry.”

TTPCom’s CTIA Wireless 2003 demonstrations will include:

B’ngo – TTPCom’s console-style games terminal as well as a fully featured mobile phone with built in digital camera and MMS capabilities. The complete design is available for immediate license and at its recent launch at the 3GSM World Congress in Cannes in February, the B’ngo design generated huge interest from leading manufacturers. B’ngo has been designed with the needs of the mobile gamer foremost in mind. The product is equipped with both Bluetooth™ and GPRS for multi-player gaming, enabling respectively interactive multi-player games in close proximity or large gaming communities spread across the entire network. B’ngo has a high quality color screen and dedicated games keys. For console style games B’ngo utilizes TTPCom’s Wireless Graphics Engine (WGE). WGE software offers a particularly exciting game playing experience because it allows simultaneous key presses – the ability to shoot and move at the same time – during game playing.

EDGE on Real Silicon – spearheading the early emergence of mobile devices using EDGE (Enhanced Data Rates for GSM Evolution) – TTPCom and Analog Devices will be conducting an EDGE demonstration on the new ADI Blackfin SoftFone™ chipset. The demonstration includes all of the EDGE modulation and coding schemes MCS 1-9 and will show the throughput capabilities of EDGE – three times the bandwidth of GPRS.

802.11/Wi-Fi – TTPCom offers a full range of 802.11 technologies for silicon chip and terminal customers and will be demonstrating a live video link over its 802.11 technology. TTPCom’s IP will interoperate with commercial wireless LAN equipment and support the full range of Windows networking functionality.

InTouch clamshell camera phone and GPRS module designs – InTouch is TTPCom’s range of ready to manufacture GPRS handset and module designs. Toshiba’s TS21i i-mode phone, which is based on an InTouch design and was recently launched in Europe, will also be on display.

TTPCom works with many of the world’s leading semiconductor manufacturers. In addition to the longstanding relationship with Analog Devices, TTPCom also works with Intel and the recently announced Intel PXA800F chip is a joint development between the two companies. TTPCom’s ‘multi-platform’ strategy, in which its protocol software is compatible with silicon from a range of manufacturers is unique in the wireless industry, and gives mobile device manufacturers the flexibility to select optimum silicon for their products.