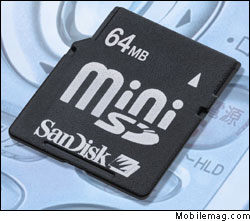 SanDisk Corporation today introduced the SanDisk miniSD(TM) card, a new thumbnail-sized flash memory card that is designed to meet the needs of the mobile phone market for greater storage capacity in the smallest possible physical form factor. The miniSD card was recently adopted by the SD Association as an ultra-small form factor extension to the SD card standard.

The SanDisk miniSD card is targeted at the new generation of 2.5G and 3G mobile phones that offer storage-intensive features such as digital cameras, video capture, MP3 players, video games, personal information management (PIM), email and voicemail capabilities. SanDisk will start customer shipments of the new miniSD card in March 2003 and is demonstrating the product at the annual CeBIT trade fair in Hall 21, Booth B24.

The miniSD card offers significant savings in card area and volume, two critical design parameters for the new generation of increasingly miniaturized mobile phones. Compared to standard SD cards, the miniSD card saves more than 40% of the printed circuit board area and more than 60% of the volume required to support the card in a portable device. SanDisk will offer a wide range of memory capacities in the new format, with 16, 32, 64, 128 and 256 megabytes (MB) expected to ship in 2003. The new card will use SanDisk’s NAND flash and SD controller technology.

“The miniSD card that we are announcing today may become one of the most important cards introduced by SanDisk in recent years”, said Eli Harari, President and CEO of SanDisk. “The miniSD form-factor was developed by the SD Card Association, founded by Matsushita, SanDisk and Toshiba, as well as leading OEM’s in mobile communications. The new generation mobile cell phones introduced this year are differentiated primarily by their exciting multimedia capabilities, including cameras, MP3 players, and internet messaging, which are expected to drive the requirement for removable flash storage cards.”

Harari continued, “Mobile phone manufacturers are looking for ways to accelerate the replacement cycle among their customers, while mobile service providers are anxious to increase the adoption by their customers of new applications beyond voice communication. In recent quarters, the sale of mobile phones incorporating digital cameras has been accelerating. This trend, which was started in Japan and Korea is now spreading to Europe and, we believe, will reach the US, China, and other large markets for cell phones in the next one to two years. Although these camera phones generally have lower image resolution than conventional digital cameras, many of the new cell phone models that are planned for introduction later this year sport good resolution 1 megapixel and 2 megapixel cameras that will elevate the need for flash cards for image storage. Therefore this new market represents a considerable incremental opportunity for the sale of our miniSD cards, starting as early as the second quarter for the low capacity bundled cards sold to OEM’s, and as early as the second half of the year for the higher capacity flash storage cards sold in the retail aftermarket for use in these camera equipped cell phones. With the new miniSD form factor, we believe mobile phone designers will have a much easier time and greater freedom in fitting a card slot into their designs. End users will benefit by being able to use the miniSD adapter to exchange data between their miniSD-equipped mobile phone and any SD compatible host, such as a digital camera, PDA or laptop PC.”

A key benefit of the miniSD card is that it is both electrically and software compatible with the existing SD standard. It uses the same SD interface, including security features for content protection (CPRM — Content Protection Rights Management) as the standard SD card. As an extension of the existing SD card standard, the miniSD card allows mobile phone and consumer electronics developers to leverage their current SD-based designs with no changes to software or electronics.

To allow interoperability with standard SD devices, SanDisk will also offer an adapter that converts the miniSD card into the SD card form factor. The adapter allows the miniSD card to fit into existing SD card slots, and thereby provide compatibility with the rapidly growing number of SD compatible devices in the market.

The miniSD card is 21.5 millimeters (mm) long, 20 mm wide and 1.4 mm thick, and occupies a footprint of 430 square mm and volume of 602 cubic mm. The new format was developed by the three original developers of the SD card, Toshiba, Matsushita and SanDisk, and recently adopted by the SD Association, an organization consisting of more than 500 member companies.

SanDisk plans to make the miniSD card available in both OEM and retail channels. SanDisk expects to begin volume shipments of 16MB miniSD in the next thirty days to OEM customers. In the second quarter, the company expects to begin shipping 32 and 64 MB cards to both OEM and retail customers. Capacities of 128 and 256MB are expected to be available in the second half of the year.

SanDisk will initially sell the miniSD card through its Japanese retail distribution channels starting in Q2 with worldwide expansion planned in the second half of the year. In order to reach the broadest set of devices for the miniSD, the SanDisk-branded miniSD cards will be packaged with a full-sized SD adapter. This will allow consumers to use their miniSD card in both miniSD slots and regular SD slot devices for maximum flexibility. Suggested retail pricing for the miniSD plus SD adapter will be 3,480 yen (US$29) for the 32MB card, which is approximately the same price of an SD card of the same capacity. Prices on higher capacities have not been set.