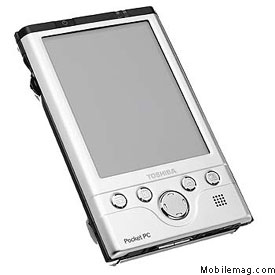 Of the 96MB of memory available to the customer, 32MB is dedicated NAND flash memory. Applications, files or programs stored in NAND flash memory will remain intact even if the battery of the PDA runs down or if the unit needs to be reset, providing peace of mind when storing critical data on the Pocket PC e750. Built-in CompactFlash® II and Secure Digital™ expansion slots are also included.

Since shipping its first handheld device in November 2001, Toshiba has continued to diversify its PDA offerings. According to Gartner Dataquest, Toshiba was the second-leading Pocket PC vendor in the United States in 2002. *