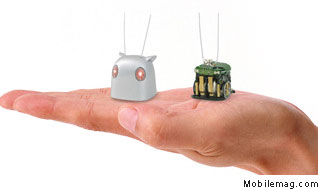 Seiko Epson Corp has developed a small robot with a volume of 7.8cm3 and that weighs 12.5g.

Named Monsieur II-P, it succeeds Monsieur, the first product in the EMRoS small robot series, which was launched in 1993.

It travels at a rate of 150mm/sec, which is faster than the traveling speed of about 10mm/sec achieved by Monsieur. Wheels built in both sides of the body move Monsieur II, and they are activated by a self-developed ultrasonic motor 0.4mm thick that the company exhibited at the Exhibition MICROMACHINE in November 2002.

At the exhibition, the company cited the possibility of applying it to small pumps and the zooming mechanism of a camera built into a mobile phone, but it did not mention that it could be built into a robot. The EMRoS series employs a stepping motor for wrist watches. The new ultrasonic motor gives more driving force than a stepping motor.

The built-in Bluetooth module enables wireless control of the new robot. For example, it is possible to let several units dance simultaneously. This function makes the new robot bigger than Monsieur, that is about 1cm3. Monsieur has only the function to follow light.

Seiko Epson does not have an immediate plan to commercialize the new robot. That will depend on how much popularity it acquires, said Seiko Epson. The company reportedly is exploring applications for robots that can make inroads in spaces too narrow for a human to fit into.

The company will exhibit the new robot at ROBODEX 2003 – Robot Dream Exposition, scheduled for April 3-6, 2003 at Pacifico Yokohama, and present the world’s “smallest full-scale robot theater” at the site.