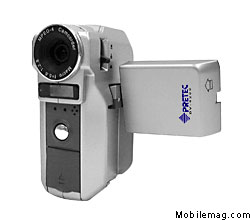 DV-4200 is a tapeless digital camcorder capable of storing up to 3 hours of video, at VHS quality or better, with a 512MB flash memory card and can also function as a digital still camera. Using high compression ratio MPEG-4 technology with patented techniques of Advanced Simple Profile including quarter-pel motion estimation, DV-4200 is the first and only product in the world to reach 30 frames per second real-time using MPEG-4 encoding/decoding, hence delivering a superb digital video quality to existing TV system.

The MPEG-4 compression file can also make every Windows-based computer to be an Audio/Video player for DV-4200 by using MPEG-4 decoding software. Still image pictures can be taken at native resolution of 2.1 mega pixels, making DV-4200 one of the highest resolution still image and best picture quality camcorders among all of the digital camcorders available in the market today. Weighing less than one pound with dimensions of 4.5x3x2 inches, DV-4200 is smaller than most DV Camcorders today. Compared with other MPEG-4 digital camcorders on the market today, with 10- 15fps (200lux low light sensitivity), VGA still image picture and mono AAC audio, DV-4200 is much superior and practical for every office or family use, offering 30fps (30lux low light sensitivity), 2.1MP still image picture, and AAC audio. With optional AV-in feature selected, users can transfer all their favorite movies or recordings from different medias (VHS tape, VCD, DVD, etc.) to MPEG-4 files, stored on flash memory card, hard disk or CD. Retail pricing is expected to be less than $499, available throughout the world, starting from Q2 2003.

Because of the adoption of MPEG-4, flash memory card and USB technologies, DV-4200 is not only a consumer electronics device, but also a PC peripheral due to its easy connection and interface with a PC. Since there are no mechanical moving parts, MPEG-4 digital camcorder can be more compact (to the size of a cigarette pack), less expensive, easier to use, and less prone to mechanical failures. Pretec will offer higher resolution DSC and MPEG-4 digital camcorder up to DVD and HDTV quality by early 2004, better than existing DVxs, with much smaller file size in MPEG-4 format.