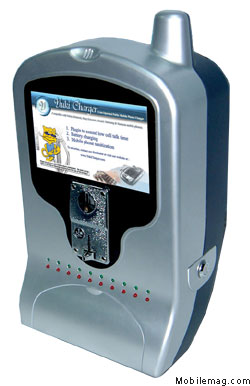 One of the most irksome things that can happen to a mobile phone user is a flat battery. Now, there is a solution by InfiniTec called the Yuki charger, a phone charger which works like a vending machine and which will be installed in public places.

All a user has to do is drop a coin into the machine and plug in the phone. He can then charge the phone in intervals of up to 10 minutes. Each charge is likely to cost either 50 cents or $1, depending on the location.

About 100 to 150 Yuki chargers will be installed in convenience stores, food courts and hotels next month, said Mr Max Ho, business development manager of Infinitec, the local company which is bringing in the made-in-China machines after witnessing its popularity there.

Thousands of such machines are available to phone users in China.

The Yuki charger accepts popular models from manufacturers such as Nokia and Sony Ericsson.

It’s been a hit in the big cities, said Mr Ho, who is confident that phone users here will be receptive to the new facility. His company is also exporting the machines to Indonesia and other Southeast Asian countries.