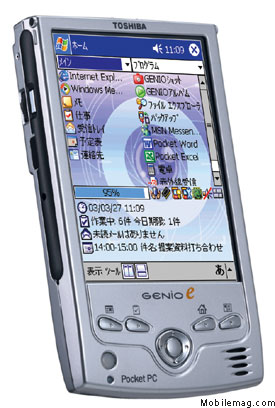 “Toshiba has announced the Genio e550C in Japan. This Pocket PC model includes a built-in digital camera with flash, plus a 400 MHz processor and 128 MB of RAM.

Unlike other handhelds with integrated cameras, the e550C’s isn’t on the top, its actually in the middle of the back. (See image below.) It is a 310,000 pixel camera, capable of taking 640 by 480 pixel or 320 by 240 pixel images, which are saved in JPEG format. The shutter button is located on the left side of the handheld.

The 320 by 240 pixel screen is a reflective poly-silicon TFT LCD capable of displaying 65,536 colors.

The e550C includes a CompactFlash Type II slot and an SD/MMC slot, which supports SDIO. Unlike previous Genio models, this one has a jog wheel.

Its 1100mAh lithium-ion battery is built-in, not replaceable.

At this point, this model has only been announced in Japan. It will sell for 74,800 YEN (about $640) when it’s available in three weeks. There is no word on when the e550C will be available in the North America. ”