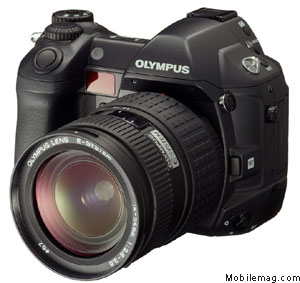 Visitors to this year’s PMA have the chance to witness a defining moment in the development of professional digital SLR photography. Between 2 and 5 March, Olympus will unveil, for the first time ever, prototypes of the new Four Thirds system digital SLR camera, lenses and accessories.

The Four Thirds system is a new open standard for digital SLR cameras with interchangeable lenses that utilise a 4/3 inch image sensor. In addition to facilitating the development of camera lens systems specifically designed to maximise digital image sensor performance – without being bound by the design conventions imposed by 35mm film camera SLR systems – the Four Thirds system establishes a common standard for lens mounts, ensuring compatibility between lenses and bodies even if they are produced by different manufacturers. Furthermore, the Four Thirds system interchangeable lenses are much smaller and lighter than 35mm and APS SLR lens systems.

The interchangeable lenses, developed and manufactured by Olympus, are exceptionally bright and compact, and deliver high quality images that only digital lenses can provide. The new Olympus lenses are (figures in parentheses indicate 35mm film camera equivalent):

The camera prototype is sure to impress, with its design tailored to meet the demands of all professional photographers. Its magnesium alloy body provides the protection needed for use in the field and on other rugged assignments, while the power battery holder enables firm and secure holding even when shooting in portrait format. Flash connection is supported via a dedicated hot-shoe. As the professional would expect, manual and automatic adjustment of the aperture, shutter speed and focus is all possible.

The first Four Thirds prototypes will be revealed at this year’s PMA in Las Vegas. Prototype models will also be presented at CeBIT, in Hanover, Germany, between 12 and 19 March, and at Photo Expo in the Tokyo Big Site, Japan, between 14 and 16 March.

Development background of the new standard

At present, there is no standard in the Digital SLR field. Manufacturers of these camera systems have until now adopted the lens mount used in their own respective 35mm or APS film SLR camera, so bodies and lenses from different manufacturers are incompatible with one another. Also, to use these lenses, manufacturers have increased the size of the image sensor. This means sensors do not reach their full potential.

For example, unlike with film, the light needs to hit the sensor at a high angle of incidence. If not, the periphery of the chip may receive insufficient light, resulting in reduced colour definition, particularly when shooting with wide-angle lenses. Furthermore, with such relatively large sensors, bigger and heavier lenses are required to achieve the resolutions required by the micron pitch of the chip’s individual sensors.

With the Four Thirds system no compromise has been made. It is solely dedicated to the needs of digital image capture and, as an open standard, it also paves the way to cross-manufacturer lens interchangeability. The use of a 4/3-type image sensor size has allowed the dimensions and weight of the lens to be reduced considerably, enhancing handling and mobility. The advantage is particularly clear to see in telephoto lenses. For example, a Four Thirds system 300mm telephoto lens will offer performance equivalent to a 600mm lens on a 35mm film SLR camera. And another benefit: it also impresses with great light gathering power.