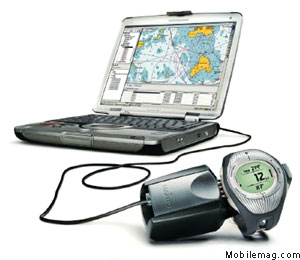 “The Suunto M9 marks our foray into GPS and sports instruments that display the user’s geographic location in real-time and store it for later analysis and community review,” said Dan Colliander, president at Suunto. “Given the size of marine charts and GPS data files, Curl played a crucial role in bringing the Suunto M9 application to life.”

Bob Hoyt, senior vice president of marketing and business development at Curl, added, “The Suunto M9 demonstrates the potential of our rich client technology in a consumer-focused Web application that is processing intensive. Curl has repeatedly proven its value in Web-enabling enterprise applications, but Suunto demonstrates the value that the Curl platform can bring to an audience of consumers.”

The Suunto M9 provides cruising and racing sailors with relevant navigation information, while they are on the water, helping them increase their performance and make the right course decisions. Among other functions, the instrument’s built-in GPS receiver collects and stores up to 500 waypoints, while the sailor is on the water. It also stores up to 50 routes, calculates correct start line bias, and tracks laylines for optimum tacking around buoys. Uploading data collected by the Suunto M9 to their PCs, sailors can analyze and visualize their routes and sailed tracks, which are superimposed on ARCS marine charts, and then share them with the Suunto Sports online community.

In developing the Suunto M9 application, Suunto Software Solutions faced significant design challenges. Clearly, the application had to be Web-based to support Suunto’s online community and, more significant, to make the entire collection of ARCS marine charts accessible to all Suunto M9 users. Additionally, Suunto demanded that its users have a fast, visually engaging application that is easy to use.

Suunto Software Systems judged the Curl Client/Web Platform to be the only technology capable of satisfying all of Suunto’s requirements. Key to the Suunto M9 application, Curl uses the client PC – not the Web server – to manipulate data and draw maps. By harnessing the client’s processor, the application is highly responsive, yet runs in a standard Web browser. Additionally, Curl streamlines the connection between the sailor’s PC and the Web servers, by making uploads and downloads almost instantaneous.